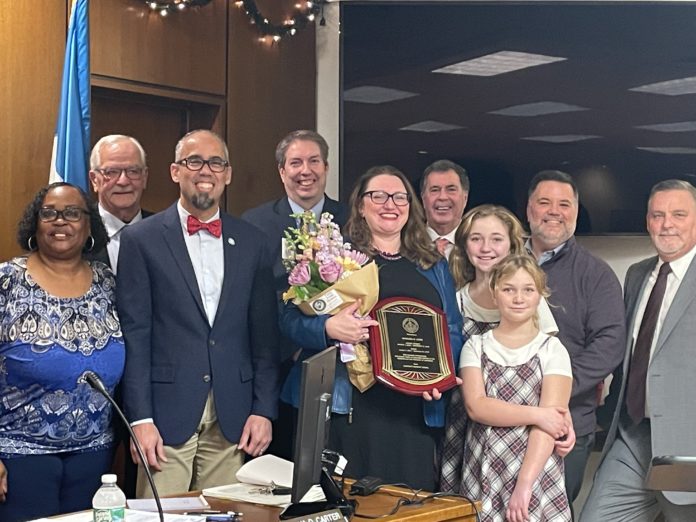 Lewis, who had served on the Lawrence Township Council since 2012 and held the ceremonial post of mayor in 2014 and 2015, leaves the Council to take a seat on the Mercer County Board of County Commissioners. The swearing-in ceremony for the county commissioners was held on Jan. 4 in Trenton.

Mayor John Ryan said “this is a special moment” because it was Lewis’ last meeting. She is “moving up the ladder” to the County Commission, he said, as he handed her a bouquet of flowers and a plaque to acknowledge her service.

“It has been an honor and a privilege to work with you. Your friends know how strong you are. You ran a campaign, kicked butt and went home to cook dinner. You are an amazing woman,” Ryan said.

Municipal Manager Kevin Nerwinski and Municipal Attorney David Roskos praised Lewis and wished her well in her new role as a County Commissioner.

“Thank you for being part of this governing body. Mercer County is lucky to have you. Not to malign the other Council members, but we are losing our smartest member,” Roskos said as he gently teased her.

Township Councilman Michael Powers said he was confident that she would do a good job on the County Commission. He said that “we know where you are now. We are going to call on you (if there is an issue affecting Lawrence Township).”

Township Councilman James Kownacki said it will be hard to pick a replacement for her, but “we will do our best to pick the right person to fill your shoes. Where you are going, it will be better for Lawrence.”

Township Councilman Christopher Bobbitt thanked Lewis for her guidance and leadership, “and really just sharing your knowledge. You are kind and thoughtful. I am going to miss you.”

In her parting remarks, Lewis thanked Lawrence residents for allowing her to serve on the Township Council. She thanked the volunteers and the municipal staff who work daily to make Lawrence a better town.

“To my husband, who coordinated dance pickups and softball around Township Council meetings, thank you. And to my girls, Abigail (11) and Bridget (9), who have sat at committee meetings and events for their entire lives, thank you for understanding and embracing our family’s commitment to the community,” Lewis said.

Lewis expressed appreciation to the Township Council and Nerwinski, the municipal manager, for working collaboratively to “get to a better policy, a better outcome and a better town.”

Reflecting on her tenure on the Township Council, Lewis pointed to several accomplishments – starting with an ordinance to permit chickens to be raised in residents’ back yards, which has been used as a model ordinance throughout New Jersey.

“We opened up Town Hall in numerous ways, with interactive touch-a-truck (events for children), holiday displays, National Night Out and a bigger and better Community Day (celebrations),” she said.

“I am excited for the future in Lawrence, which begs the question of ‘Why am I leaving?'” Lewis said.

She said it’s important for leaders to look at their service and ask whether their voice is still necessary here, is this the best place for their voice and are they continuing to encourage new participation and new voices.

“For me, it’s that second question that spurred me on. I am excited for the opportunities in Lawrence but I saw a need for a stronger partner for our municipalities in our county government,” Lewis said.

“I saw that without that county partnership, some of the opportunities would never see their full potential. I believe that to best serve my community, I needed to put what I have learned here in Lawrence to work for Mercer County,” she said.

“While I am leaving this dais, I am not leaving Lawrence. I will continue to serve this community and the other 11 communities in our county. I will bring all that I have learned with me,” she said.

Getting back to business, the Lawrence Township Council approved an assortment of resolutions appointing the municipal attorney and other professional staff, as well as routine matters related to the annual reorganization meeting.

In her final action on the Lawrence Township Council, Lewis made a motion for the meeting to adjourn that was quickly approved. And with that, Lewis’ tenure on the Township Council was officially over.