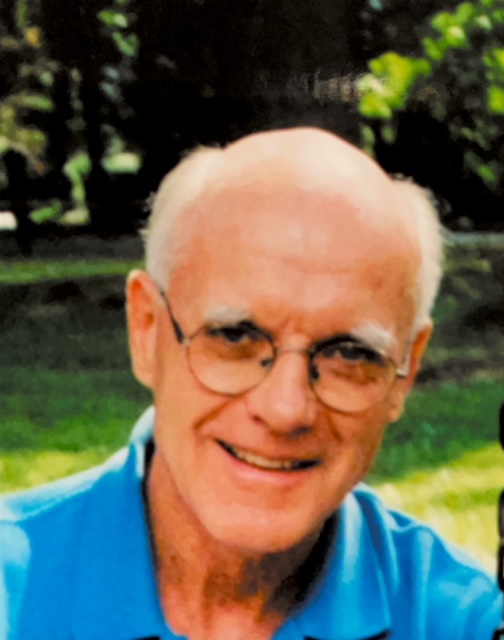 Dick was born on October 21, 1933 in Harrisburg, Pennsylvania to William and Sarah (Frye) Davidson. He attended Baldwin Township High School in Pittsburgh, PA and was named valedictorian of his graduating class in 1951. He then attended Pennsylvania State University where he received a bachelor’s degree in science in 1955.

Dick served in the United States Navy on the USS Rich DDE 820 from 1955 until 1957. In 1956, his naval service included three months in Europe and the Mediterranean during the Suez Crisis.

On October 24, 1964, Dick married Jean Anne Harwood at the Central Presbyterian Church in Manhattan. They moved to Garden City, Long Island in 1969 with their son William shortly before the birth of their daughter Susan. The family moved to Princeton, NJ in 1978.

Dick started his career at Citibank where he worked as an investment officer and an investment research analyst. He then moved to IBM where he spent over twenty years working in sales and marketing.

Dick had a passion for Aikido and devoted nearly 30 years to learning and teaching the martial art. He joined the Kokikai practice groups at the Princeton Y and The College of New Jersey and earned a black belt (4th Dan).

Dick loved living in Princeton and often enjoyed long walks in the woods at the Institute for Advanced Study. He was an avid reader, bird watcher and classical music lover with affection for the works of J.S. Bach, Mozart and Vivaldi. He also loved doing The New York Times crossword puzzle and was known for always having a puzzle and a book with him wherever he went. Dick will be remembered for his dry wit, his great intellect, and his altruistic nature as well as being a loving husband and father. He adored his grandchildren and had a talent for making them laugh and inventing creative games to play with them.

Dick was preceded in death by his parents William and Sarah, his sister Jean, and his brother Robert. He is survived by his wife Jean, his son Bill Davidson and daughter-in-law Michelle Quinn-Davidson, his daughter Susan Davidson Serreze and son-in-law Peter Serreze, and his grandchildren Wesley and Sara Serreze.

A virtual celebration of life will be held at a later date. In lieu of flowers, donations in Dick’s memory may be made to the Parkinson’s Foundation or the Princeton Public Library.