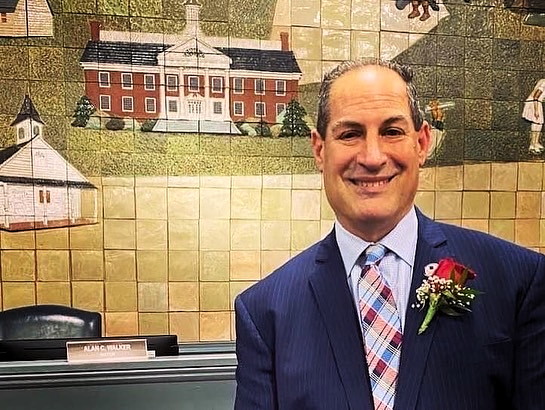 FREEHOLD TOWNSHIP — Committeeman Alan Walker has been elected by his fellow members of the Township Committee to serve as Freehold Township’s mayor for 2023.

Walker, who is in his fourth year on the governing body, is serving as mayor for the first time during his tenure.

In Freehold Township’s form of government, the mayor is not directly elected by residents. When the Township Committee reorganizes each January, one of the five committee members is selected by his or her peers to serve as mayor for the year.

Walker is joined on the committee by Anthony Ammiano, Thomas Cook, Lester A. Preston Jr. and Maureen Fasano. All five committee members are Republicans.

Fasano, who served as mayor in 2022, was not in attendance at the Jan. 6 reorganization meeting. She was elected to a new three-year term in November and was sworn in to begin serving that term during a regular meeting on Jan. 10.

During the reorganization meeting, Cook nominated Walker to serve as mayor and a vote of the four committee members in attendance confirmed him for the position.

Preston was elected to serve as deputy mayor. He has served on the committee since 2015.

Walker, who was appointed to the Township Committee in 2020 to fill an open seat, won a three-year term in November 2020. Before joining the governing body, Walker served on the Parks and Recreation Commission from 2011-19.

Asked about his goals for the year, Walker said, “While we have a fantastic group of municipal employees who love working for Freehold Township, one thing the committee and administration has identified is turnover in certain positions and I would like to be a part of the solution to have better retention of our workforce in those areas.

“I want all of our employees to feel they can come to me or any member of the Township Committee to discuss how we could do things better or improve processes.

“A municipality is evaluated by its residents for how it provides services to the community and we are always striving to do better for the taxpayer,” he said.

In his mayor’s address during the reorganization meeting at the municipal building, Walker said he was “extremely moved by seeing all of the people in this room. Thank you to the public, my friends, my family, for coming out. Your unwavering support for the five of us is greatly appreciated.

“Representing our residents as mayor for the next 12 months in a town I truly love is something I am looking forward to. Freehold Township is a great place to work and to live. We have a phenomenal work force, one that takes tremendous pride in their jobs to deliver exceptional service to our residents.

“In advance, I want to thank our department heads and all of our employees for your steadfast dedication. We are incredibly lucky to have a team of people that is so caring and thoughtful to your positions.

“Time after time, you put our residents’ concerns first and in the end the results show. Please continue to follow those values in 2023. Your efforts are to be commended. Thank you for always going above and beyond,” Walker said.

Regarding his fellow members of the Township Committee, Walker said, “The words of encouragement we receive from our supporters do not go unnoticed and as a team we strive to get things done that benefit all of our residents; there truly is no ‘I’ in this group. Each of us who serve on the committee brings a unique skill set to the table, skills that enable us as a team to work productively to get things done.”

Walker noted recent and upcoming accomplishments in the township, including hiring new police officers, the construction of a 1.5-million-gallon water tank on Gravel Hill Road, the planned construction of a new Shop Rite supermarket and the planned preservation of a Revolutionary War era farmhouse.

The new mayor thanked Richard Gatto and Rob Kash for their years of service on the Planning Board before leaving that panel in 2022; he congratulated Township Engineer Tim White on his impending retirement; and he congratulated Raymond Santiago, with whom he served on the Parks and Recreation Commission, on his recent appointment as Monmouth County’s prosecutor.

“This past year we said goodbye to two longtime pillars of the community. Former and first-ever Township Administrator Frederick Jahn passed away in April. Fred was a pioneer in local government, serving for 27 years during the 1970s until his retirement in the 1990s.

“We also sadly lost Committeewoman Fasano’s father, Raymond Flood, in October. Mr. Flood was a life member of the Freehold Township Independent Fire Company No. 1 as a volunteer firefighter from 1976 to 2006. He also served as chairman of the Board of Fire Commissioners. Our condolences go out to the families of both of these gentlemen,” Walker said.

“I also want to thank the Black Sox softball family for loving this town as much as I do and for working around my schedule with the town.

“To my friends, it is an honor to represent you as mayor. Honorable mention to my friend, Pete, who surprised me here and traveled all the way from North Carolina.

“To my family, especially my wife Jen, who I have no idea where I would be in life without her. On behalf of all of us on the Township Committee, we hope your 2023 holds great health and lots of happiness,” Walker said.