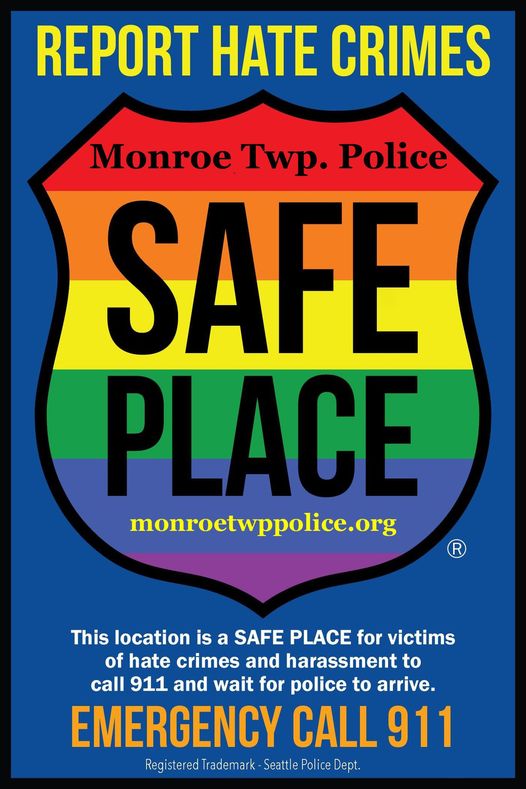 The Monroe Township Police Department has established a new Safe Place Program in the township to create safe locations for bias crimes victims and encourage the reporting of those incidents.

The program is designed to reduce and report LGBTQ+ (lesbian, gay, bisexual, transgender, queer) crimes and intimidations, along with additional bias crimes or incidents.

Additionally, the program’s creation in Monroe reinforces trust between minority communities and the police department.

“The Safe Place Program has three basic components. The first is this sticker [decal],” Monroe Police Detective Steven Menhart said. “It is highly visible and designates the business [or location] as a safe place location in town.”

Part Two: An owner and staff of a business, who have agreed to be a part of the program, will call 911 if the victim of a bias crime or incident comes into their location.

And Part Three: Business owner and staff agree to let the victim shelter at that specific location until the police arrive.

“It is basic and simple. It is what we hope anyone would do from one human being to another,” Menhart said.

He stressed that the program is necessary.

“Until you have found yourself as part of a group where you did not know who to go to for help or who you can trust, you may not understand the significance of a program like this,” Menhart said.

The Safe Place Program was created in Seattle, Wash. and the program was born from a distrust between minority communities such as the LGBTQ community, people of foreign nationalities and certain religious groups and the police, according to Menhart.

As the liaison, Ritter found a significant disparity between actual crime and crime that was being reported.

Menhart said if “these [bias] crimes” are not being reported to police, they “cannot investigate and cannot protect people from becoming future victims of these criminals.”

“What we are aiming to do with this program is bridge the gap. We are trying to take a step forward in building and reinforcing the trust between minority communities and police,” he said.

Menhart added that Safe Place stickers are universal and are easily recognizable symbols.

The decals can be placed in local businesses, public and private schools, and community organizations. They can be applied outside the front entrance of the establishment, school or organization and also inside the building.

“Displaying it at a business shows that place is a business where someone can go to for help and seek shelter. It also shows that the Monroe Township Police Department supports the LGBTQ community and all minority communities,” he said.

“It reassures victims of hate crimes that when we do arrive, we will treat them with dignity and respect.”

Monroe Township is the 304th agency in the country to join the program and all of the police department’s officers have been trained on it, according to Menhart.

It is free to join, and you can enroll at any time,” Menhart said.