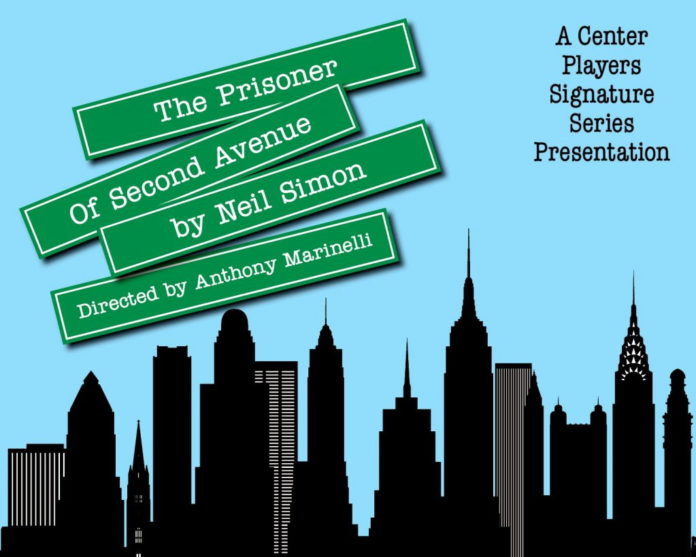 Center Players will present Neil Simon’s classic comedy “The Prisoner of Second Avenue” as its first production of 2023.

Directed by award-winning filmmaker and playwright Anthony Marinelli of Manalapan, “The Prisoner of Second Avenue” will run from Feb. 10-26 at Center Playhouse, 35 South St., Freehold Borough.

“The Prisoner of Second Avenue” centers around Mel Edison, an advertising executive who is at war: with New York City, with his neighbors, and most of all with himself.

After being laid off from his job of 22 years, he has a hard time breaking the news to his devoted wife, Edna, but after their apartment is robbed and it doesn’t seem possible things can get any worse, Mel has a nervous breakdown.

Soon, Edna goes back to work to support the family while Mel becomes a virtual prisoner in his own home, feeling worthless and unsure of what the future holds.

This dark comedy shows how a husband and wife can weather any storm as long they have each other’s love, support – and a very big shovel, according to a press release.

“Even though the original Broadway production opened in 1971, I found a lot of similar themes to what we are experiencing now in this country with layoffs, inflation and a general insecurity about the future,” noted Marinelli.

“Plus, ageism is still very real, so the fact that Mel is worried he won’t be able to find another job at age 47 is still a concern to many. Of course, Neil Simon handles these issues with humor, which is what makes the play so enjoyable and relatable,” he said.

Performances of “The Prisoner of Second Avenue” will be on Fridays and Saturdays at 8 p.m. and Sundays at 2 p.m. Tickets are priced from $28 to $30 and are available online at www.centerplayers.org or by calling 732-462- 9093.

Over the past 15 years, Marinelli has written and directed for stage and screen,
including his upcoming film, “Why I Had To Kill You While You Slept.”

On the New York City stage, he produced and directed “Fool for Love” and “Frankie and Johnny in the Clair de Lune.”

Another short, “Walt Whitman Never Paid For It,” by Angelo Berkowitz, won the Audience Choice Award at the Richmond International Film Festival.

At Center Players, Marinelli has directed staged readings of “Who’s Afraid of Virginia Woolf?” and “Speed-the-Plow,” as well as Signature Series Presentations “Play It Again, Sam,” “Chapter Two,” “Butterflies Are Free,” “Same Time Next Year,” “Prelude to a Kiss” and “Crimes of the Heart.”

Center Players is celebrating its 21st season at Center Playhouse. In addition to its signature plays, the theater also sponsors free play readings and other special events and offers dinner and theater packages with several local restaurants, according to the press release.

More information can be found at www.centerplayers.org.