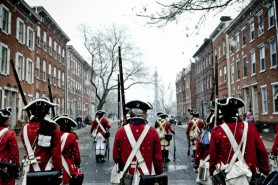 Trenton, NJ—Come experience our annual winter reenactment during Trenton’s Patriots Week Celebration! On Saturday, December 28th, be immersed in history as you are surrounded by reenactors portraying the soldiers who fought during the Battles of Trenton, which ultimately shaped the destiny of the Revolutionary War and our nation. Follow the troops through the streets and watch as they relive the events of these fateful battles. Come back to interact with the soldiers, take tours of the oldest free-standing military barracks in North America, and visit The Quartermaster’s Store. What better way to celebrate New Jersey’s revolutionary history than by celebrating this crucial Trenton victory?

Experience the excitement of the Battle of Trenton live! Following the all-night crossing and nine-mile march from McKonkey’s Ferry with a sleet storm at their backs, Washington’s little army of 2,400 men and 18 cannons arrived in Trenton around 8 AM on the morning of December 26, 1776. Generals Washington and Greene surrounded the northern part of town while General Sullivan struck the town along what is now West State Street, cutting off escape to the south over the Assunpink Creek. After a running street fight lasting little more than an hour, there were over 90 casualties and the Hessian troops surrendered.

Having abandoned Trenton shortly after the battle on December 26, Washington re-crossed with a much larger army later in the week upon learning the British had not re-occupied Trenton. On the morning of January 2, 1777, he dispatched a small brigade up what is now Rt. 206 to reconnoiter toward Princeton. They were met by a very strong column of British, Hessians, and Highlanders under General Cornwallis and driven back along a bitterly contested, afternoon-long retreat into Trenton proper.

The Second Battle of Trenton (or the Battle of the Assunpink) is reenacted in Mill Hill Park at 3 PM – witness the action live!

The Old Barracks Museum is located at 101 Barrack Street, Trenton, NJ. Parking for the event is free, close, and plentiful, available in the small lot next to the museum as well as the lot next to The War Memorial.  There is special reduced pricing for this event. The battles are free to the public, and entrance onto the museum grounds is $5 per person (children 5 and under are free).