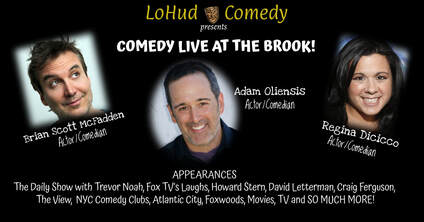 Three of NYC’s most hilarious comedians will take you on a journey of laughter about finding love, being in love, relationships, marriage… and so much more! Our lineup of standup comedians are regulars on the NYC comedy club circuit that will have audiences laughing well after they leave the theater. Hosted by LoHud Comedy‘s Actor/ Comedian Adam Oliensis, who recently appeared on Comedy Central’s The Daily Show with Trevor Noah. Adam has opened for such comedy legends and luminaries as Robert Klein, Colin Quinn, Gilbert Gottfried, and Larry Miller. His latest comedy album, Aged Whine, can be heard on Sirius XM Radio 99.
Actor/Comedian/ Brian Scott McFadden is one of the funniest standup comics working in the industry today. His high energy performances are some of the most unique, incisive & hilarious routines around. This multidimensional performer has appeared in the films, The Secret Life of Walter Mitty, Ice Age II, and Robots. Brian has just released his first live Comedy CD “What Women Want.”
And a favorite host of Gotham Comedy Club, Regina Dicicco can be heard on The Howard Stern Show and has graced the stage with Whoopi Goldberg, Lisa Lampanelli, Dominic Chianese, Gilbert Gottfried, and Nick DiPaolo. You can also hear Regina long before you see her, warming up the audience and having fun with the ladies and audiences of ABC’s The View. Tickets are $25