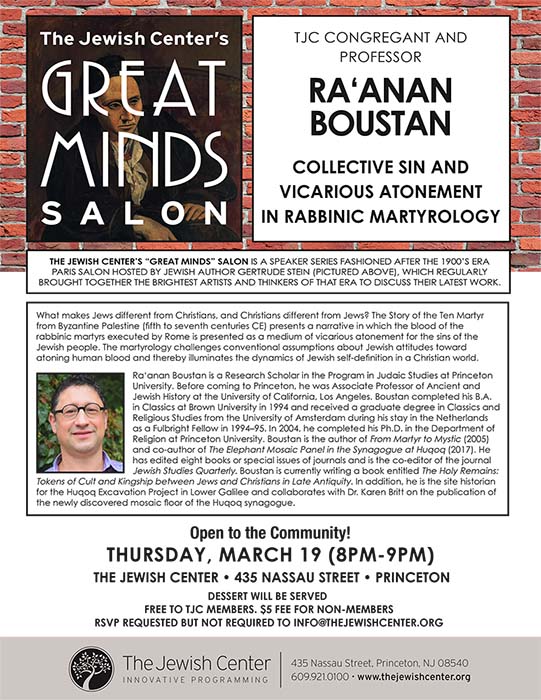 What makes Jews different from Christians, and Christians different from Jews? The Story of the Ten Martyr from Byzantine Palestine (fifth to seventh centuries CE) presents a narrative in which the blood of the rabbinic martyrs executed by Rome is presented as a medium of vicarious atonement for the sins of the Jewish people. The martyrology challenges conventional assumptions about Jewish attitudes toward atoning human blood and thereby illuminates the dynamics of Jewish self-definition in a Christian world.

Ra‘anan Boustan is a Research Scholar in the Program in Judaic Studies at Princeton University. Before coming to Princeton, he was Associate Professor of Ancient and Jewish History at the University of California, Los Angeles. Boustan completed his B.A. in Classics at Brown University in 1994 and received a graduate degree in Classics and Religious Studies from the University of Amsterdam during his stay in the Netherlands as a Fulbright Fellow in 1994–95. In 2004, he completed his Ph.D. in the Department of

Religion at Princeton University. Boustan is the author of From Martyr to Mystic (2005) and co-author of The Elephant Mosaic Panel in the Synagogue at Huqoq (2017). He has edited eight books or special issues of journals and is the co-editor of the journal Jewish Studies Quarterly. Boustan is currently writing a book entitled The Holy Remains: Tokens of Cult and Kingship between Jews and Christians in Late Antiquity. In addition, he is the site historian for the Huqoq Excavation Project in Lower Galilee and collaborates with Dr. Karen Britt on the publication of the newly discovered mosaic floor of the Huqoq synagogue.

OPEN TO THE COMMUNITY at the Jewish Center of Princeton (435 Nassau St.).
Non-member entrance fee: $5.  Dessert will be served.