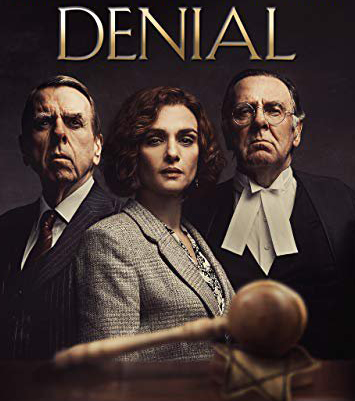 American academic Deborah E. Lipstadt in her 1993 book, Denying the Holocaust, called a British amateur historian, David Irving, “one of the most dangerous spokesmen for Holocaust denial.” Irving in response sued Lipstadt for libel, which under British law meant that the defendant must prove his assertion. The film Denial, directed by Mick Jackson and released in 2016, is the story of that trial in 2000. The film stars Rachel Weisz as Deborah Lipstadt and Timothy Spall as David Irving. When Deborah Lipstadt is instructed by her lawyers to remain silent throughout the trial it causes her much internal conflict. It was her intention to confront Irving directly and provide the opportunity for Holocaust survivors to give their own testimonies. Instead expert witnesses had to prove that Irving had distorted evidence and that gas chambers existed at Auschwitz.

A lot was at stake: If Irving were successful, holocaust denial could become acceptable.

This film runs 1 hour and 49 minutes.