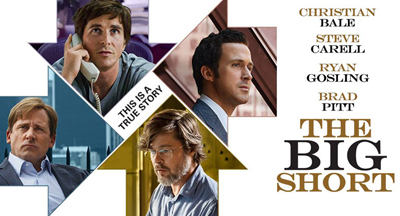 The School of Social Science and the Institute Film Series will be screening the film The Big Short.

Adapted from the 2010 book The Big Short: Inside the Doomsday Machine by Michael Lewis, The Big Short shows the speculative practices that led to the housing bubble that in turn triggered the 2008 financial crisis. Based on real events involving an hedge fund manager, a foreign bank salesman, and two ambitious investors, it unveils in a humorous and yet pedagogic manner the complex mechanisms behind the crash, in particular how these unscrupulous misfits contributed to it and profited from it. In The New York Times, Neil Irwin wrote that “it is the strongest film explanation of the global financial crisis.” Directed by Adam McKay, The Big Shortwon an Oscar for Best Adapted Screenplay.

A post-screening discussion will be led by Sarah Quinn, Associate Professor of Sociology, University of Washington, and Benjamin Braun, Senior Researcher, Max Planck Institute for the Study of Societies, both current members in the school of School of Social Science.

This is the first film in the series Economy and Society, curated by the School of Social Science.