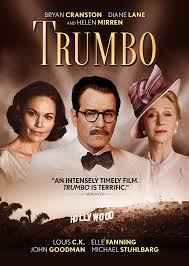 Temple Shalom of Aberdeen is presenting a Movie Night on February 18th   showing the film Trumbo. Admission is free and open to the community.  The film will be shown starting at 7:30 pm.

In 1947, Dalton Trumbo (Bryan Cranston) was Hollywood’s top screenwriter until he and other artists were jailed and blacklisted for their political beliefs. This movie recounts how Dalton used words and wit to win two Academy Awards and expose the absurdity and injustice under the blacklist.