centraljersey.com
Home Stronger Than The Storm with author Deborah Mura

Stronger Than The Storm with author Deborah Mura 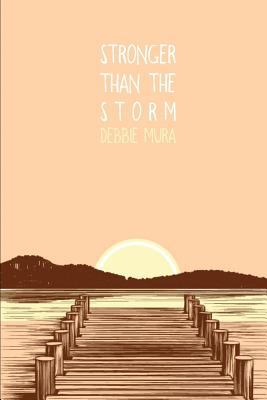 Professor’s Novel About How Youth Are Affected By Climate Change

“Was there really a time before Sandy? It seemed so hard to remember.” The main character in the novel Stronger than the Storm, Lacey, named for a local town near where the story takes place, realizes she wasn’t in Kansas anymore.

The prologue starts with the thoughts of the characters that live in a coastal town on the night of Superstorm Sandy. “This is less water than Irene. Wouldn’t you say?” Mr. Anderson said of a hurricane that had largely fizzled out a year ago. “Definitely,” Polly said. “Like a little wind and rain is going to keep us away from the beach. Pft,” Lacey said. “Just a whole lot of panic for nothing.” Mrs. Peterson agreed. “We haven’t flooded since ’92,” Richard Anderson said. Forty-five minutes later, MacGyver called and yelled into Lacey’s ear “You guys need to get out now!” “No, seriously, The water’s rising! We just barely got our car out.”

Stronger than the Storm is a novel that could be about any coastal town or village from the voices of our children. It is about the effect that a life-changing event has on their emotions and feelings that often gets overlooked as their adult cohort is busy rebuilding. Author, and Professor at Brookdale, Deborah Mura said “I felt like the teenagers got lost, a lot was put on them and people didn’t really realize the burden that was on them. I think that is probably happening in Pandemic too, just based on what I saw with Sandy.” High School rituals all changed; it’s not what they were expecting at all. Turning 16, getting their driver’s license, going to a winter formal, all these things changed drastically for them. Mura said there is a strong message in the book. “For young people, it’s about resilience, that they will get through and they get through things that they never thought they would or could. For adults around them, it’s about, pay attention.”

Lacey has three best friends when the storm hits. She and each of her best friends have a very different journey based on what happens from the storm. Their journeys are all very difficult for 15-year-olds. Lacey needs to move out of her house for a while, and then, they are living in just the second story of their damaged home, and they go through all this crazy stuff. One of her friends, their house gets torn down. Another friend (Lacey’s closest friend and love interest) moves off to Florida. And, the fourth friend in the group, lives in the same neighborhood a couple of blocks in on higher ground, her family owns a construction company, and this is a boom to them at the exact same time. It’s about these four kids whose lives have always been the same, same block, same friends, and then one event changes everything and takes them away from each other.

Spring of 2013 Mura started to write the novel. “I was in therapy for PTSD after the storm. My therapist thought it would be a really good idea to journal. She thought I had far too much pressure on me and should sit back and relax and journal. So, I’m like oh no, I’m going to go write a novel.” After all, this has been a life-long dream of Mura. “As a child, I remember having a marble notebook and walking around writing notes in it, saying I am going to write a book.” It did help her overcome the PTSD, long before she finished the novel in 2019. “I think writing through things, you get to change things, you get to make things the way you wanted them, or at least work on them.” Mura’s character Lacey also goes to therapy, and she gets in the car and says” I don’t understand why this works all we did was talk but I feel better.”

Giving back, helping others is another means to healing and healthy well-being. One of the characters in the novel Ashley started working in the food pantry that was helping her family. “The teens are all going through different stages, it’s not a popular thing with her friends,” Mura said. In one of Ashley’s conversations, she said, “No, really. It feels good, helping out, y’know? And at least it’s doing something, rather than sitting around feeling sorry for ourselves.”

While taking an escape trip in January a few months after the storm, with her family to Disney World for one night, to ride the roller coasters, her very favorite pastime, Mura overheard a conversation where someone was making light of Superstorm Sandy. Mura thought to herself, “The night of the storm is such a small period of time in comparison to what people who went through it think of as Sandy” It’s not just about that night!”

“Watching so-called world leaders deny or ignore climate change is heartbreaking and infuriating. While they pontificate in an alternate reality, ordinary people are suffering every day from the Katrina’s, Sandy’s, wildfires, etc. There are actions we can all be taking to make a difference, but nothing happens while we argue reality and ignore those around us who are truly suffering,” said Mura.

Youth constitute the majority of the population in many countries and have an increasingly strong social and environmental awareness, which has the power to transform our societies towards a low-carbon and climate-resilient future (source: United Nations Youth). Judith Unger Assistant Professor of Library Innovation & Learning Resources Institute at Brookdale Community College said in presenting this community event, “I knew the topic would resonate with a younger crowd who might have not experienced Superstorm Sandy. I think that making younger people aware of Superstorm Sandy and the cause behind it would help make more folks aware of the climate crisis that we have in NJ with the rising sea levels and stronger storms.”

“In an effort to extend its reach within the community, the Monmouth County Library is delighted to partner with Brookdale Community College with a co-sponsored virtual event featuring author Deborah Mura. Mura’s book, “Stronger Than the Storm” was recently added to the library’s local author collection with an anticipated appeal to a Young Adult audience,” according to Library Director Judith G. Tolchin.

A natural disaster changes people. If you live through one you never forget the shortages communities have, like not enough food or water. There are examples in the book of this from the teens who had just experienced Sandy, get caught stealing water and food for a neighboring town experiencing a big fire. “For those who have never lived through a natural disaster, I urge you to try to remember the real people behind the headlines immediately following an event and in the days, weeks, months, and even years after the media has moved on. It literally took the hard work of hundreds of people just to get my own family of four back home after Sandy,” said Mura. Proceeds from this book will go to organizations like the People’s Pantry that opened its doors to help in the aftermath of Sandy and Helping Hands located on the campus of Brookdale. “You have no idea how much even a cup of hot chocolate can mean!”

The American Library Association (ALA), has initiated libraries to engage their communities in programs and conversations that address the climate crisis with the Resilient Communities: Libraries Respond to Climate Change grant. This program has been funded by a generous grant from Andrew and Carol Phelps, the parents of two library master’s students. The pilot program funds film screenings, community dialogues, and related events based on local interest in 25 public and academic libraries in 2020 and 2021, and will fund the creation of a suite of free programming resources about the climate crisis that will be available to all libraries. Libraries in NJ awarded are East Brunswick Public Library, Princeton Public Library, Red Bank Public Library, Brookdale Community College, Margaret E. Heggan Free Library, and the Monmouth County Library.

The public is invited to register to join the discussion, scheduled for March 11, 2021, at 3:00 pm, via the Brookdale Community College website or the Monmouth County Library’s website. This event is Free and Open to the Public.