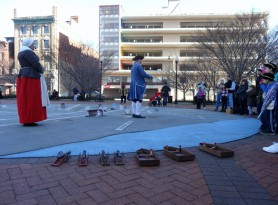 Trenton, NJ— Get the children involved first-hand with Washington’s victory in Trenton with the exciting, interactive puppet show “The Trouble with Trenton”! This “mini” historical look at an amazing piece of our history is presented with marionettes and rod puppets – and lots of help from the audience! Watch the battle unfold before your eyes, and see the action as it has never been seen before. Show includes live music, large puppets and props, and plenty of “revolting” action. This event is hosted by the Old Barracks Museum and presented by Tuckers’ Tales Puppet Theater.

The puppet show will take place on Saturday, December 28 at 12 PM and 2 PM, in between the Battles of Trenton reenactments. This free event takes place at Hanover Street Plaza, on the corner of West Hanover Street and North Warren Street, just a block off of East State Street.

The Old Barracks Museum is located at 101 Barrack Street, Trenton, NJ. Parking for the event is free, close, and plentiful, available in the small lot next to the museum as well as the lot next to The War Memorial.  The puppet shows are free to the public, and entrance onto the museum grounds is $5 per person (children 5 and under are free).