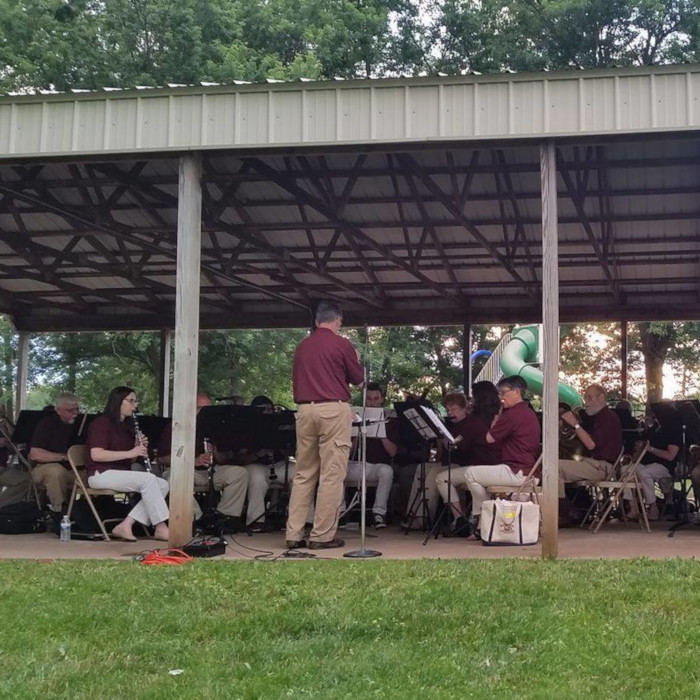 Typically, this annual concert, a favorite event among local residents, would mark the close of the band’s season. However, due to the pandemic, this concert will be the first official public performance that the band has given since December of 2019! After resuming rehearsals in May, the band is excited to finally perform again and embark on this first of several performances planned for this year, which marks the 25th anniversary of the band’s founding! The program will feature patriotic selections such as “America the Beautiful,” medleys of rock songs from the 1980s and big band jazz hits by Frank Sinatra, and selections from Broadway musicals such as “The Music Man.”

The concert is free and open to the general public, although donations will be accepted to benefit the band, a non-profit group comprised entirely of volunteer musicians. Audience members of all ages are encouraged to bring picnic blankets and chairs. In the event of inclement weather or public health emergency, the announcement to postpone or cancel this concert will be made on the band’s website (whitehousewindsymphony.org), Facebook page (facebook.com/whitehousewind), and Instagram feed (instagram.com/whitehousewind). Attendees must adhere to all safety guidelines as recommended by the Center for Disease Control and mandated by the local and state government. Attendance is at one’s own risk; discretion is advised, especially for those at high-risk for infection for COVID-19.

The Whitehouse Wind Symphony was founded by conductor emeritus Casey Bork on April 15, 1996. It is dedicated to presenting the best in all varieties of wind band literature. Since its founding, the band has grown rapidly, attracting experienced musicians as regular members from all over New Jersey, as well as New York City and eastern Pennsylvania. It is now comprised of approximately 50 amateur and professional musicians who perform together regularly to enthusiastic audiences throughout central and northern New Jersey. The band was recently named the winner of the 2021 Hunterdon Happening List in the category of favorite band/musician!

The Whitehouse Wind Symphony is committed to making music accessible to all. For information about venue accessibility, please send an email to whitehousewindsymphony@gmail.com, or call the band’s ADA coordinator, Margaret Smith, at 908-534-6662.

Funding has been made possible in part by the New Jersey State Council on the Arts/Department of State, a Partner Agency of the National Endowment for the Arts, through funds administered by the Hunterdon County Cultural & Heritage Commission.