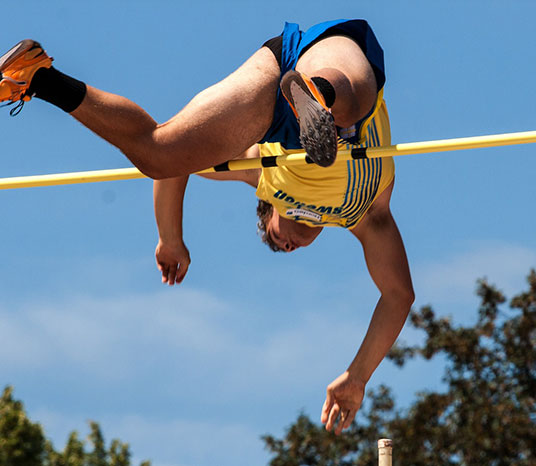 It’s not who qualifies the fastest — it’s who is fastest when it matters most.

No one knows that better than Marlboro High School’s Kwaku Amponsan, who won the 55-meter hurdles finals at the Shore Conference Indoor Track and Field Championships. He did it despite having only the fifth-fastest time (8.09) during the qualifying heats at the Jan. 27 meet.

Qualifying, however, isn’t when you want to show your hand. You save your best for the finals.

When it came time to run the hurdles finals, the Marlboro junior was swiftest when it counted. His time went from 8.09 down to 7.77, as he added the conference title to the Monmouth County championship he won earlier in January at the John Bennett Indoor Athletic Complex in Toms River.

“He is very competitive and wants to win,” Sypniewski said. “He is probably the most competitive boy I’ve seen since I been here.

“He is raw, but I think because of his desire to be great, he will get better and we will see much more of him.”

This is Amponsan’s first indoor season. His family moved to Marlboro from Ohio last year, and he didn’t know that Marlboro had indoor track until it was too late. He revealed his potential outdoors in the spring, winning the county 100-meter title and finishing second in the 110-meter hurdles at the sophomore championships.

Roche ran another superb solo effort in the girls 1,600, winning by an astonishing 22 seconds. That is light years ahead of the field for a championship race at that distance. The Cornell University-bound Roche cranked out a time of 4:52.48.

Colts Neck’s boys got mileage from its distance runners to finish fourth (20). Marlboro and Freehold Township tied for ninth (12)