The girls basketball game between East Brunswick High School (15-2) and Piscataway Township High School (14-3) Feb. 9 (weather permitting) may have been a preview of the Greater Middlesex Conference (GMC) championship game.

Both Red Division teams have proved they belong among the best in the conference and should be seeded accordingly when the tournament committee meets Feb. 12.

Monroe Township High School (17-1) is another team hoping for a high seed and can prove its case by defeating Bishop George Ahr High School (12-7) Feb. 9 and Piscataway at home Feb. 11.

East Brunswick’s reemergence as one the GMC’s best can directly relate to when Keith Lane took over as head coach in 2013-14. The Bears were 5-20 the year before but improved their record to 16-7 in Lane’s first year as coach. Last season, East Brunswick finished 20-6 and this year’s record clearly demonstrates the Bears are a serious contender for the conference tournament title.

“I’d like to say we aren’t there yet,” Lane said about the team playing to its potential. “I think we can play better offensively. Whether that happens is the question.”

The key to East Brunswick’ success has been a balanced attack that prevents opponents from concentrating on stopping one player. No starter averages above 10 points a game, but the entire rotation has contributed to the offense.

“The sophomores have improved a lot since the beginning of the season, and our seniors have been very consistent,” Lane said. “At this point in the season, we want to present a few wrinkles so opponents can’t focus on stopping us based on the past. It’s also important we don’t practice too long because we want our players to be fresh as opposed to being tired and burned out.”

In the final power point rankings at the cutoff for the NJSIAA state tournament, East Brunswick owns the top spot in the NJSIAA Central Jersey Group IV bracket. Monroe is the third-ranked team in the same group.

The South River High School girls (17-3) dropped a 54-52 decision to Dunellen High School (18-2) Feb. 8, which cost it the Gold Division title. The Rams have lost twice to Dunellen, which finished unbeaten in division play.

The Rams now will set their sights on playing competitive basketball against the GMC’s best in the upcoming conference tournament. Following the GMCs, South River will try to take advantage of being named the top seed in the Central Jersey Group I Tournament, which begins following the GMCs Tournament.

Spotswood High School (6-11) is ranked 11th in Central Jersey Group II and will most likely be on the road in the first round. 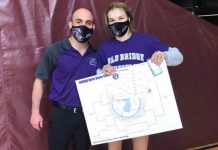