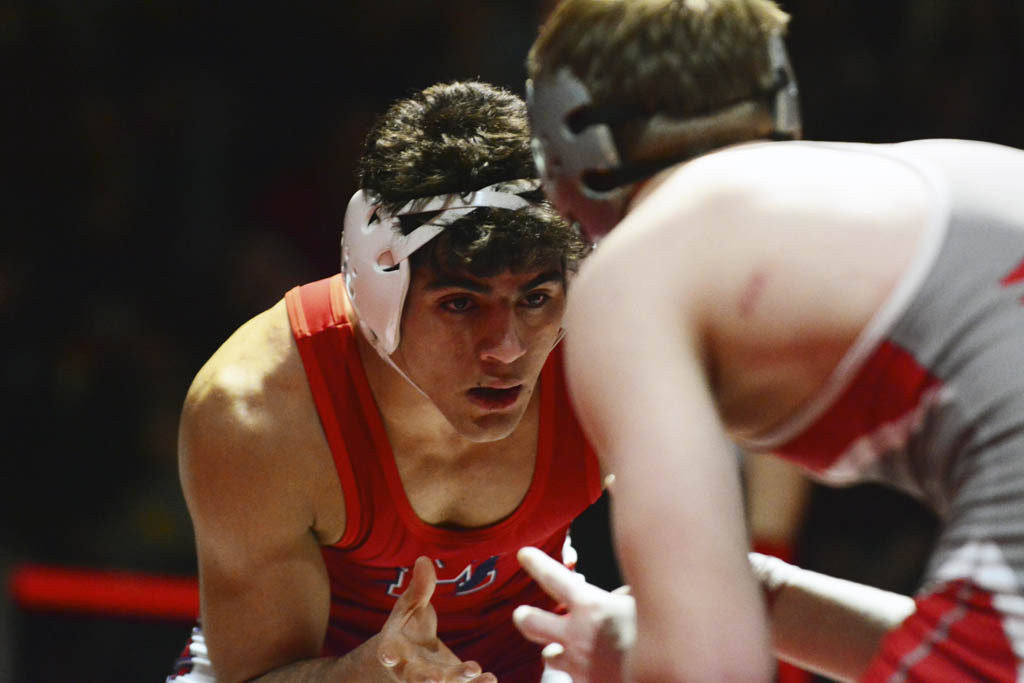 Matt McGowan at 126 pounds ended Jackson Memorial High School’s dry spell of three years without a Region 6 champion and became the 51st region champion to go on the plaque in the school gym while leading three other wrestlers from the township into the state championships.

Eight wrestlers — four from each school — competed in the region tournament for the chance to advance to the state championships.

There were no marquee names from either school as in recent region tournaments, although Kalmowitz racked up 36 wins.

McGowan (28-3), a runner-up in the District 21 competition and No. 6 seed, pulled out a 3-2 overtime decision in the region finals over top-seeded Russell Benson of Raritan High School.

Jackson Memorial coach Aaron Gottesman said prior to the region tournament that he believed McGowan had a very good chance if he wrestled to the best of his ability, and the coach feels that carries on into the state championships.

Spino expected a showdown in the region tournament with Brick Memorial High School’s Gianni Ghione, but that didn’t come about.

Gottesman said Spino has to cut a lot of weight and Spino said it’s a tough challenge for him.

“I drop a lot right before the match,” he said. “It’s very hard, but once I’m there. I’m OK and just put it all out there in the match.”

“His technique is the best on the team,” Gottesman said.

Jackson Liberty’s Kalmowitz (36-3), who carried a district title into the regions at 160 pounds, lost to Wall’s Josh Glantzman, 4-1, on tiebreaker criteria in the finals. He had pulled out gritty decisions in the quarterfinals over No. 3-seed Sean Bowker of Southern Regional High School, 3-2, on tiebreaker criteria and then prevailed 4-2 over Matawan Regional High School seasoned wrestler Derrick Wiley. Kalmowitz had beaten Wiley, 6-2, in the district finals.

Pellegrino, a district runner-up at 113 pounds, faced the task of wrestling a maximum of five matches when he dropped his second-round match in the region to Toms River High School North freshman Nick Reilly. But he wrestled his way back to a rematch in the consolations, where Pellegrino prevailed over Reilly, 3-2.

It is the sixth straight year that a Jackson Liberty wrestler advances to the state championships.

“We’ve been fortunate to have good wrestlers come to the program — guys who work on their progress over the years,” Jackson Liberty coach Mike Eddy said.

He said being aggressive is the key from here. The Jackson wrestlers worked out this week for two days at a Brick Memorial state championship warm-up camp in which they scrimmaged against other wrestlers in their weight classes.

Eddy pointed out the amended state championship format this year in which an opening-round loser can come back in wrestlebacks, assuring each wrestler of two bouts.

He said both Jackson Liberty wrestlers can place and have continued to wrestle well of late.

“Now they have nothing to lose. Anything can happen,” Eddy said.

Four other wrestlers — two from each school — fell short of advancing.

It was an especially bitter ending for Jackson Memorial 182-pounder Tanner Kelly, who was pinned at 2:10 by Point Pleasant Beach High School’s Jack Baker in the wrestlebacks. Kelly, a district champion and No. 2 seed, had lost a 6-4 decision in the semifinals to No. 3-seed Anthony Vetrano of Middletown High School North. He had pulled out a 5-4 quarterfinals victory over Rumson-Fair Haven Regional High School’s Theo Addison.

Kelly, who is 18-4, has been on a comeback from a back injury suffered two seasons ago in a match against Howell, and he felt the rehab regimen had raised his mental toughness — a key for big matches late in the season. It didn’t need surgery, he said, but required a rigorous physical therapy rehabilitation over 18 months.

“I had to hang upside down and had to do everything from the left side,” Kelly said.

He eventually worked the right side back into shape and, as a right-hander, felt it made him a more versatile wrestler.

“I was just as strong on my left side. I was doing inversions, stretches every day,” Kelly said. “In the beginning, I couldn’t move without pain, couldn’t walk straight. Then I was doing push-ups, pull-ups, body weight squat and jogging.”

He had to do a lot of stretching at practices and matches.

“The cold weather was the worst,” he said. “But the coaches stayed on top of me.”

He also credited Steve Rivera at the Elite Gym for reinforcing his mental toughness. By the start of the season, Kelly was as ready as he’d ever be and his season was not without a lot of great memories, including a repeat NJSIAA Central Jersey, Group IV championship for his team.

Teammate Adante Davis, the No. 7 seed at 195 pounds who also played on the repeat state championship football team, had his bid for Atlantic City stopped in a lost 6-0 decision to No. 4-seed Will Farparan of Manchester Township High School. Davis, who ended his season at 23-9, won his region opener over No. 10-seed Nick Suriano of Southern Regional in a 5-3 decision but then lost to No. 2-seed Matt McKenzie of Wall, 13-0, in the quarterfinals. He pulled out a 4-3 decision over No. 6-seed Robert Hulse of Middletown High School South.

As for Jackson Liberty, heavyweight Jared DiZenzo, seeded No. 9, saw his season end at 27-4 after facing the top two seeds. DiZenzo was decisioned, 7-0, in the second round of wrestlebacks by No. 2-seed John Tomlinson of Long Branch High School. DiZenzo won his preliminary bout in a 3-2 decision over Freehold Township High School’s Taylor Larkin, the No. 8 seed, but lost, 5-1, in the quarterfinals to top-seeded Nick Rivera of Brick Memorial. He won his first wrestleback bout, 4-2, over No. 5-seed Darius Marrow of Central Regional High School.