Not just a pretty face — or an impossible waist Betty Brosmer Weider, the first lady of fitness 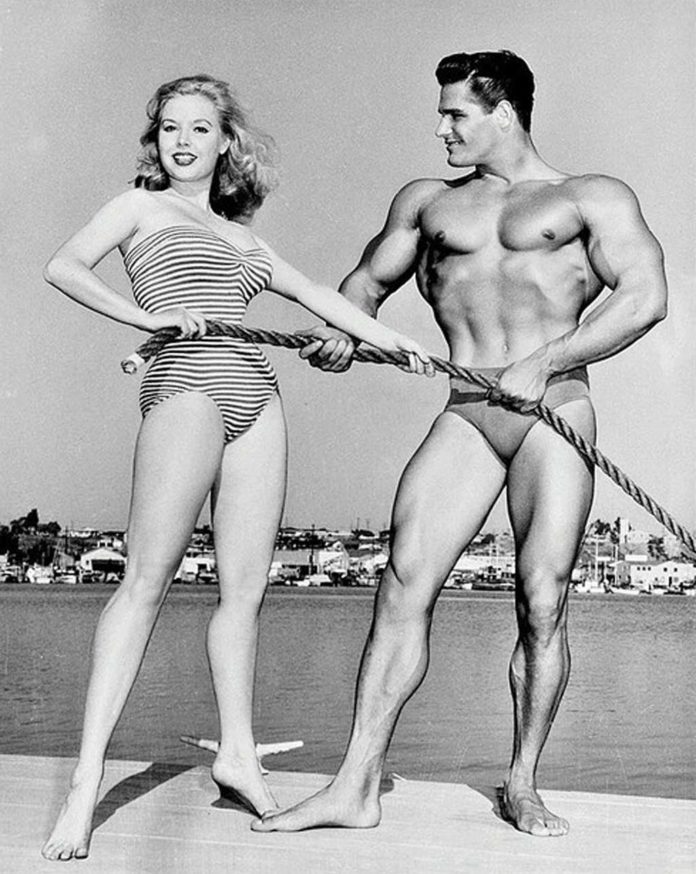 It has been said that if you looked up the term “hourglass figure” in the dictionary, you would find Betty Brosmer Weider’s picture beside it. And for good reason: With measurements at one time rounding out to 37-18-36, Betty stood out. Her platinum blond hair and winning smile, strongly reminiscent of Marilyn Monroe, helped make her what many consider the first true supermodel.
“There was a glow, an incandescence about Betty that was not to be found in any other model,” claims Steve Sullivan, author of a number of books on glamour girls. Yet for all her beauty pageant victories and modeling gigs — which numbered in the hundreds and included magazine spreads, calendars, album covers, billboards and life-size retail store cutouts — Betty was, and still is, more than just a pretty face with an impossible waist and the highest-paid pinup of the ’50s.
Born in Pasadena, Calif., in 1935, Betty launched her modeling career at age 13 in the Sears & Roebuck Catalog. Only two years later, she earned her first beauty contest title, “Miss Television,” for which she posed at the top of the Empire State Building with the TV antenna and scored a spot on the cover of TV Guide. Before her 20th birthday she had earned no fewer than 50 competition crowns, and had appeared on more than 200 magazine covers.
But for Betty — a student of self-improvement from her teens who credited a beloved aunt for teaching her healthy eating habits — health and fitness were an integral facet of feminine beauty. The first major fashion model to use weight training, she was also influential in creating health and nutrition guidelines for women’s needs. Her 1961 marriage to Joe Weider, a bodybuilder and entrepreneur who discovered and mentored Arnold Schwarzenegger, marked the end of her modeling career but launched a decades-long collaboration that included co-authorship of The Weider Book of Bodybuilding for Women and The Weider Body Book.
By the late ’70s Betty had dreamed for years of a health and fitness publication geared solely to women. Frustrated by the lies and seemingly magical weight-loss schemes that focused primarily on diet, she urged marketers to “Tell the truth. Give women something they can believe. Be honest and help women create an integrated lifestyle of health, fitness and nutrition, based on reliable information.” With Joe and women’s free weight fitness expert Christine McIntyre, she founded Shape magazine in 1981, and penned the magazine columns “Body by Betty” and “Health by Betty” to keep her readers informed of current medical and scientific fitness research.
The shy, “skinny” child who designed her first workout using a men’s mail order course and weights probably never dreamed she would one day celebrate the opening of a Museum of Physical Culture bearing her name, or be inducted into the International Sports Hall of Fame. Now 79, Betty is white-haired and a widow, but still lovely, and through the legacy produced by her unflagging dedication, still an inspiration to women and girls around the world.