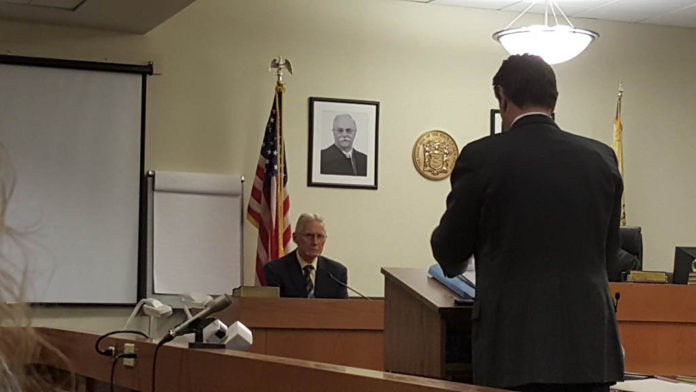 NEW BRUNSWICK — Almost two weeks after five-year-old Timothy “Timmy” Wiltsey was reported missing in May 1991, the different agencies of law enforcement working the case were in agreement that his mother, Michelle Lodzinski, was the primary suspect in his disappearance.

Sayreville Detective Sgt. Richard Sloan, now retired, told the jury last week that it was at a meeting on June 11, 1991, that members of the Sayreville Police Department, the Middlesex County Prosecutor’s Office, and the Federal Bureau of Investigation (FBI) came to this agreement.

The murder trial of Lodzinski, now 48, on charges that she “did knowingly or willfully” murder her son in 1991 concluded its second week of state witness testimony on March 24.

The trial is expected to last three months, with the jury hearing a number of witnesses and evidence.

Lodzinski was arrested on Aug. 6, 2014, in Jensen Beach, Fla., after a Middlesex County grand jury indicted her on the murder charges on July 31, 2014.

Sloan testified about the police investigation and recordings of taped formal statements by Lodzinski in which she changed her story on what happened at the carnival. These were played to the jury panel of 10 men and seven women.

The day of May 25, 1991, Lodzinski told police that she and Timmy went to Holmdel Park around 2:30 p.m. to see the animals and played kickball with a basketball. At around 6:30 p.m., she said, the duo headed to the carnival held at Kennedy Park in Sayreville.

Lodzinski told authorities that she had only turned her back on Timmy, who was about eight feet away from her, for a few minutes to get a soda at a concession stand when he vanished.

Lodzinski’s attorney, Gerald Krovatin, asked the retired detective if he took into account that Lodzinski had not slept on May 25 into May 26 or if he had inquired whether she had eaten before the interview.

“From my observation, there was nothing to document,” he said.

The jury learned the investigation included tapping Lodzinski’s phone through New Jersey Bell on May 26, which Sloan said Lodzinski did not have a problem with and a search of her Augusta Street home on May 28. There was nothing found in the search, Sloan said.

During the defense cross-examination, Sloan said Lodzinski had come back to the police station with a set of clothes for Timmy in case they found him. This time, he said, Lodzinski appeared “genuinely upset for Timmy as a mother should.”

The jury learned that the Sayreville Police Department had reached out to the FBI’s Behavioral Analysis unit to garner an interview strategy, which Sloan said was for the sole purpose of finding Timmy.

“We felt Michelle was not being forthright with us and she had more information,” he said, adding the interview strategy was used in hopes of eliciting more information from her about the boy’s whereabouts.

On June 6, Lodzinski gave her second statement to police, during which Sloan said her demeanor was “angry and upset.” He said Lodzinski stormed out after almost four hours stating, “Go ahead, charge me if you can.” In the interview, she also stated “I don’t know where Timmy is” at least 10 times.

Later that day, Lodzinski came back with Bob Javick, a Union County police officer and a good friend of her sister, Linda, and brother-in-law, David. She apologized to police for storming out of the interview.

On June 7, Lodzinski told police that she lied to them and told them about her encounter with Ellen, a little girl, and two adult white males.

Lodzinski said Ellen, whom she recognized as a client at an Amboy Bank she used to be employed at, had approached her at the carnival. She said Ellen would come in and cash welfare checks.

She said Timmy wanted to go on a ride and Ellen offered to watch him as she went to get a soda. Sloan said composite sketches of Ellen and the two unknown males were disseminated to various police departments.

The jury heard testimony from Timmy’s father, George Wiltsey, who said he met Lodzinski through her older brother. Wiltsey said Lodzinki told him that she was pregnant and the couple moved to his hometown of Walker, Iowa, for financial reasons. Timmy was born in Iowa in August 1985, and the young family moved into an apartment.

However, Wiltsey said that after six months, Lodzinski was not happy and did not want to remain there. Wiltsey, who became a bit emotional, said he was not happy about it and that was the last time he saw his son. He said he did not pay any child support for his son, and the items he had sent for his son were sent back to him right away.

“She wanted nothing to do with me,” he said, admitting on cross-examination that during an argument that he had slapped her.

Wiltsey said he learned of Timmy’s disappearance through the Linn County Sheriff’s Department in Iowa.

Other testimony included witnesses who said they did not see a little boy with Lodzinski at the carnival.

Lodzinski’s former friend and landlord, Theresa McConnell, testified Lodzinski called her from the carnival telling her she was holding hands with Timmy as they went to the concession line at the carnival, he let go, and after she paid for the soda, he was gone. She said she had seen Lodzinski and Timmy the night before on their porch waiting for pizza to arrive.

“Timmy looked happy, and so did Michelle,” she said.

McConnell said she had lived next door to Lodzinski and Timmy with her then husband David Packard and her daughter, who she said was in the same Kindergarten class as Timmy at St. Mary’s School in South Amboy and was best friends with him.

Laurie Mechkowski testified she was at the carnival with her family and was behind Lodzinski at the concession stand.

She said she did not know Lodzinski at the time; however, when she found out what had happened on the news, she had a sick feeling and called Sayreville Police to report that what was being reported is not what she observed.

Mechkowski said she was waiting to order food and observed a young woman, later identified as Lodzinski, having a conversation, which she described as a little flirtatious that involved giggling, with a young man behind the concession stand.

Mechkowski said she did not see any children with Lodzinski nor did she see her around the ride area. She said as she was exiting the carnival with her family she remembered seeing Lodzinski with a “serious, not happy, maybe concerned look.”

Dennis Gusckowski, a retired Jersey City Police officer, testified he was at the carnival with his family, which included his young daughter and son.

He said he felt compelled to call police after seeing a news report about Timmy’s disappearance because of a resemblance between his son, who was wearing Teenage Mutant Ninja Turtle sneakers that day, and Timmy’s description as well as remembering a scraggly looking man brushing up against his shoulder as his family was leaving the carnival.

Tony Jackowski, who has been a volunteer firefighter in Sayreville for 33 years, testified that he was part of the search team that scoured Kennedy Park after Timmy was reported missing.

He said at one point, he and a fellow firefighter were assigned to give Lodzinski a ride to her home in South Amboy to pick an item of Timmy’s to bring back to the park so that the K-9 cadaver dogs could pick up a scent.

Jackowski testified that he did not observe Lodzinski as being upset and/or anxious on the three- to four-minute ride to her home.

He said after Lodzinski picked up an item, she asked to stop at Fatso Fogarty’s Bar in South Amboy where her boyfriend, Fred Bruno, had worked as a bouncer.

Jackowski said it was his understanding they were going to pick up Bruno; however, Lodzinski came out by herself 10 to 15 minutes later.

McConnell, who became emotional on the stand, told the jury that she believed Lodzinski for the longest time until after Timmy’s body was found in April 1992 in the marshland off Olympia Drive in Raritan Center in Edison and after she found out Lodzinski had changed her story about what happened at the carnival. She said her husband, David, helped the FBI collect garbage from Lodzinski’s trash can for any evidence.

The jury also heard testimony that Lodzinski had an affair with a married man and suffered a miscarriage months after Timmy vanished.

Marie Krause, Bob Javick’s wife at the time, said they welcomed Lodzinski to stay with them to get away from the media at her home in South Amboy in the days after Timmy was reported missing.

Krause said she confronted her husband about it and the affair was confirmed by Lodzinski, who she said called her telling her that she was pregnant with Javick’s baby. However, Lodzinski suffered a miscarriage a week or two later.