On the way to sharing the Shore Conference A North Division Division title in 2015, the boys lacrosse teams at Howell High School and Freehold Township High School relied heavily on seniors.

Those seniors have graduated — some to play in college — and replacing them will be the challenge as both teams look to remain at or near the top in the division and the Shore Conference. Both will rely on the talent pool they’ve developed while establishing winning traditions.

This spring, Howell will count on role players from last year to step up and replace the 15 graduated seniors that includes leading scorers Mark Buannic and Jake Sherman and defender Anthony Pozsonyi.

“The strength of our team lies in the midfield,” head coach Anthony Bonjavanni said. “We return multiple guys who logged a ton of valuable minutes for us last season scoring some big goals in very big spots. We have some quality depth there.”

Up front on attack, Howell has the other returning starter, senior Drew Bukowiec, as well as senior Zach Halperin and sophomore Braedon Baldwin.

The starting defenders are seniors Kevin Bailey and Chris Boncimino and junior Jack Noone. The 6-foot-5 Noone is the team’s best defender with great takeway ability and athleticism.

Howell naturally lost a lot of experience, but Bonjavanni believes he has a team that will get stronger with each game and be a postseason threat. That’s not to say that A North is not in the picture.

The Patriots have a new head coach, Ryan Eichner, and 10 returnees as they look to continue their leading role in A North.

However, Freehold Township, which was 14-6 in 2015, does have to replace some graduating standouts like A North Player of the Year Billy Sasso, the defensive tandem of Mike O’Brien and Colin Bitsko and goalie Matt Schroepfer.

“Last year, our team was all seniors and sophomores,” Eichner said. “We graduated a top player at every position but return a big group of juniors that played important minutes for us.”

Eichner expects his club, which reached the Shore Conference Tournament semifinals in 2015, to be in the hunt for the division crown and remain one of the Shore’s better teams.

The Patriots defense is still solid with veterans Tyler Von Nessen and Ty Sebor, who are seniors, and junior Shawn Poole all returning.

Junior Mike Colicchia and senior Jake Dudics are back in the middle.

Aidan Purcell and Billy Patten, a freshman and sophomore, respectively, are vying for the start in goal.

Although the Patriots lost a lot of talent, this is a program with a championship tradition that reloads rather than rebuilds.

Colts Neck High School was a postseason qualifier last year. Head coach Jeff Rosenberg has a seasoned team that will start seven seniors and four juniors. Colts Neck only lost to the A North co-champions and was 7-5 against everyone else.

The Cougars’ strength, Rosenberg pointed out, is in goal, where senior Andrew Halmi rules. He had a remarkable .700 save percentage last year while making 239 saves. He will keep the Cougars in the game.

The Cougars’ midfielders are led by senior Jack Schaefer, who led the team in scoring last year with 17 goals and 16 assists. Senior Anthony Mauriello and juniors Patrick Gazzillo and Colin Scalea complete the starting unit.

On attack, the Cougars are looking to senior Chris Bisignano and junior Vinnie Garguilo to do the finishing. 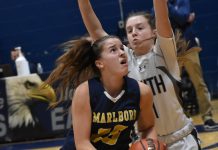