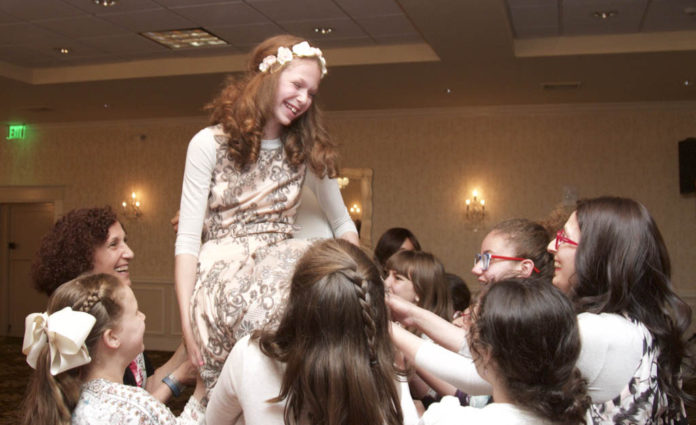 MONROE — A local 12-year-old girl was hoping for the historic reunion of a Polish family who hid her descendants in their attic during World War II.

Before her Bat Mitzvah celebration, Mattil Zaklikovsky of Monroe had decided to embark on a major research project: She was eager to learn more about her ancestors as well as the great-grandmother whose name she shares, Mattil Rosensztein, according to information provided by Mattil’s father, Rabbi Eliezer Zaklikovsky of the Chabad Jewish Center of Monroe.

This project had resulted in a years-long search with the assistance of her parents as well as a team of researchers from New Jersey, Australia and Poland.
Mattil and her family learned that her great-grandmother and her family were rescued during World War II by their neighbors, a gentile Polish family, in a tiny village outside of Ludlin, Poland.
Pieces of information soon materialized through a series of events, and one of those pieces included Rosensztein’s school registration documents, according to Eliezer Zaklikovsky. Researchers sought information from retired teachers, websites and local churches to see if anyone in the village remembered the Rosensztein family as well as the family who rescued them.
It was soon discovered through court documents that a man named Joseph Paluch helped Rosensztein and her family during World War II to survive, putting his own family at risk of death had the Germans discovered this effort, Eliezer Zaklikovsky said.
After many more visits to the village, the family of Paluch was discovered. A woman named Genowefa, 91, who is Paluch’s daughter, still holds vivid memories of her life during World War II as well as memories of the Rosensztein family before, during and after the war, according to Eliezer Zaklikovsky.
The rabbi said that getting in touch with Genowefa was not an easy task as her family did not want anything to do with Rosensztein’s relatives, nor did they have any desire to relive the painful events from the past. After multiple letters seeking further contact from her family, a bouquet of flowers, which was accepted by Genowefa, was sent to give thanks for saving Mattil Zaklikovsky’s great-grandmother and her family years ago.
On June 21, during Mattil Zaklikovsky’s Bat Mitzvah celebration, the Polish researcher who assisted the Zaklikovskys in their studies brought greetings from Genowefa’s family, who could not attend the event.
1 of 3
Share
Facebook
Twitter
Email
Print
Previous articleDriver admits guilt in death of Marlboro woman
Next articleHILLSBOROUGH: Girl Scouts donate flags to schools on Flag Day 