BAPS mourn the loss of their spiritual leader 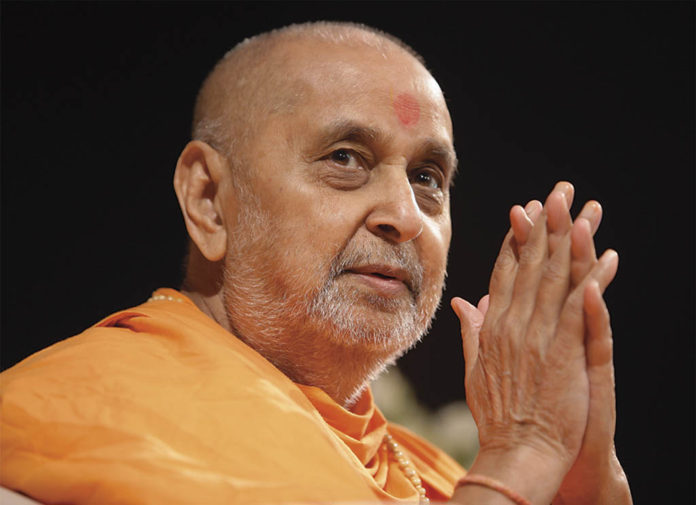 His Holiness Pramukh Swami Maharaj, the spiritual head of BAPS Swaminarayan Sanstha and creator of the BAPS Shri Swaminarayan Mandir in Robbinsville, passed away on Aug. 13 at the age of 95.

More than 2.1 million devotees from around the world went to the village of Sarangpur in Gujarat, India, to pay their last respects before his final rites were performed Aug. 17, according to information provided by BAPS.

Born as Shantilal Patel on Dec. 7, 1921, Pramukh Swami Maharaj was initiated as a swami (Hindu monk) on Jan. 10, 1940, and received the name Narayanswarupdas Swami. On May 21, 1950, he was appointed as head of the organization and came to be known as Pramukh Swami Maharaj, according to BAPS.

Pramukh Swami Maharaj had dedicated his life towards the service and personal development of others, establishing mandirs (Hindu temples), as well as developing and overseeing schools, hospitals and disaster relief services to provide infrastructure and support across communities of all sizes.

“Mary Pat and I offer our deepest condolences to all who are mourning the passing of His Holiness Pramukh Swami Maharaj, the creator of Akshardham and spiritual leader of BAPS Swaminarayan Sanstha. New Jersey had a special connection with Pramukh Swami, who visited the state during every U.S. tour, spreading a message of unity and uplifting countless lives. He will be remembered by all for his selflessness and service to others,” Gov. Chris Christie said in the statement.

“Although I am deeply saddened by the news, I truly believe he will always be with us through his teachings. I lost a friend but even in that loss, I have gained insight and wisdom in the reassurance that his message thrives in how I choose to live my life,” Chaitali Inamdar of Edison said in the statement.

Tributes are shared at http://pramukhswami.org/tributes.