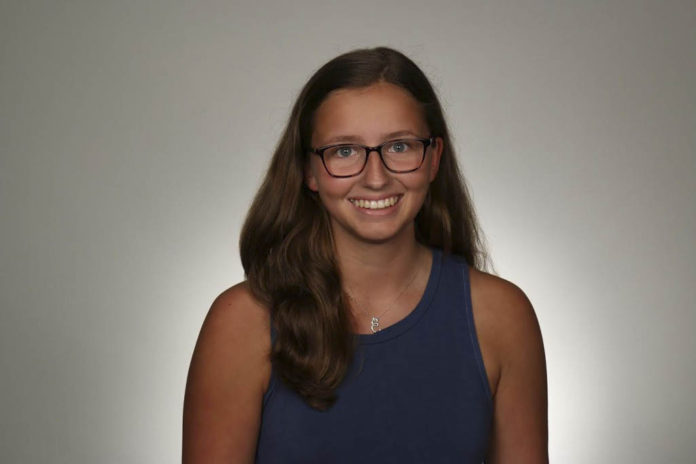 A young woman from Shrewsbury has been selected as the winner of the New Jersey Press Foundation’s (NJPF) 2017 Bernard Kilgore Memorial Scholarship.

She will receive the scholarship, which is valued at $5,000, at the New Jersey Press Association’s spring awards celebration on April 20.

As part of the competition, Ella compiled a portfolio of the stories that she wrote for her school newspaper and local online and print publications. The topics of her stories ranged from high school football and college basketball to opinion pieces on politics and features about alumni doing well in the community.

A sports fan since she was in first grade, Ella was introduced to journalism when she was 10 years old and would find herself reading the sports section of the New York Times and watching SportsCenter before she left for school.

Her inspiration to pursue a career in journalism came after reading the book “Last Shot” by John Feinstein, which is about two young reporters who save the Final Four college basketball tournament.

“That book was my ‘All The President’s Men,'” she said. “Reading it made me want to become a sports journalist, too.”

While still 10 years old, the young woman started her own sports blog called “The Inside Scoop” in 2009 and began writing for her middle school newspaper later in the year.

The area of journalism that interests Ella the most is longform sports writing.

“I have always been drawn to the lengthy features that explore the below-the-surface stories about sports,” Ella said. “I think that smart, long pieces that generate measured responses and have meaning beyond the instant in which they are published are more important than ever today. We are in a time in which so much content in both the sports journalism and general journalism world is driven by speed and volume rather than accuracy. That’s why I hope to write longform stories professionally one day.”

After she graduates from her high school, Ella will attend the Medill School of Journalism at Northwestern University, Illinois, in the fall. Seeking to further her career in journalism, she intends to focus on magazine and longform writing at Medill. Her ultimate goal is to write longform sports stories for Sports Illustrated or ESPN the Magazine or write about sports and pop culture for The Ringer.

With her pursuit of a career in journalism now aided by a scholarship, the young woman is grateful for the award she has received.

“I am honored to be awarded with the 2017 Bernard Kilgore Memorial Scholarship, and I thank the members of the Scholarship Committee for inspiring and supporting student journalists in our state,” Ella said.