Edison graduates walk into their future 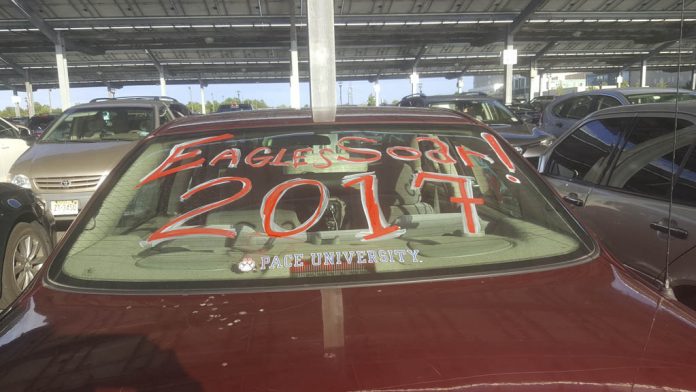 EDISON — A sea of green was followed by a sea of red as the Edison School District held graduation ceremonies for its two high schools.

In both ceremonies, Schools Superintendent Richard O’Malley gave the presentation of the class of 2017.

Diplomas were awarded by members of the Edison Board of Education and school officials.

The J.P. Stevens High School graduation was held first with the processional by the school’s Wind Ensemble.

The students waved, fist bumped and dabbed their way to their seats.

Principal Gail Pawlikowski welcomed and addressed the graduates, their families and friends.

During the ceremony, the J.P. Stevens Chamber Ensemble sang “How Far I’ll Go” by Lin-Manuel Miranda from the movie “Moana”.

Vincent, in his speech “Five Secrets to Surviving J.P. Stevens — No. 4 Will Make Teachers Hate You,” told his classmates as they embark on their next journey to “procrastinate, help others, redefine success, plan ahead and to always expect the unexpected.”

In the fall, Vincent plans to study computer science while attending the University of California at Berkeley, California.

Yeluri spun the lyrics of rap artist Kendrick Lamar’s “DNA” as well as “Humble” into his speech “Inside Our DNA” speaking about the many aspects of J.P. Stevens that make up the school’s DNA from the many accolades of music, sports to academics that have been recognized.

“This school changed us, opened our minds and challenged us,” he said.

Yeluri told his classmates that Principal Pawlikowski encouraged them from day one to “be the change we wish to see in the world.”

“The changes are already in our DNA [from our experiences at J.P. Stevens] … now it’s up to you to move on and change the world,” he said ending his speech quoting Kendrick Lamar “Sit down, be humble.”

In the fall, Akshay will attend California Institute of Technology in Pasadena, California to pursue a major in chemistry.

The Edison High School graduation ceremony followed with the processional by the school’s band.

Like their neighbors at J.P. Stevens, the students waved, fist bumped and dabbed their way to their seats.

Principal Charles K. Ross welcomed and addressed the graduates, their families and friends.

Ross said during the past four years, the class of close to 500 graduates has become a collection of stars that has taken his breath away.

Speeches were given by Valedictorian Vaishnavi Dhulkhed and Salutatorian Rebecca Welch.

Vaishnavi, who is headed to Cornell University, Ithaca, New York, in the fall, said it was honor to be named valedictorian, but it also brought fear of the responsibility that came with it.

She said their graduation class was the last class born in the 1990s and saw the high school integrate into the 21st century transforming into a technology advanced center.

Vaishnavi said if anything that she could encourage her fellow classmates as they all move on is to be kind to one another.

She said coming from India she saw first-hand what bullying was as she was bullied in middle school for her way of talking.

Vaishnavi said there are so many highlights of her time at Edison High School; however, she said there is a regret and that is not stopping her peers when she observed a form of bullying.

“I hid and was afraid to become a target again,” she said.

But, Vaishnavi said it’s never too late to start and promote kindness.

“Be kind,” she said adding that whatever opportunities are waiting, never forget that kindness trumps hate. “Lead in the direction of kindness.”

Rebecca, who is heading to Rutgers University in the fall, encouraged her classmates to surround themselves with family, friends, and wise confidants. If they do so, they will not falter.

“You will be amazed at what you can achieve,” she said.

Sherwin told his class that high school was their first case of reality, where they learned that “life is really, really hard.”

Sherwin encouraged his classmates to be those who do and move forward in their lives and not stay stagnant.

At this year’s graduation, Edison High School saw its first graduating class of the STEM Academy, which Vaishnavi and Rebecca were both part of.