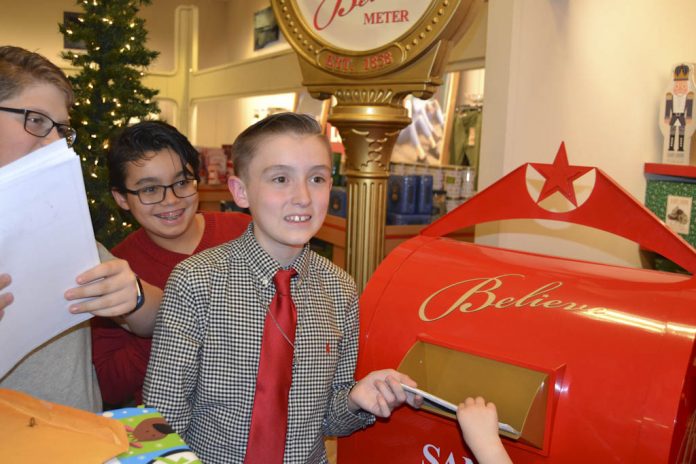 OLD BRIDGE — Year after year AJ Silvestri, an eighth grader at Carl Sandburg Middle School, sets out to essentially beat his mission of collecting as many letters for the Make-A-Wish Foundation through Macy’s Believe campaign.

This year, AJ, himself a Make-A-Wish kid, collected a record number 78,257 letters.

With the help of supporters including Schools Superintendent David Cittadino, family, friends, classmates, teachers and community supporters, AJ dropped off boxes filled to the brim with letters at the Macy’s in the Brunswick Square Mall in East Brunswick on Dec. 8.

The day marked National Believe Day — for every letter delivered, Macy’s donates $2 to Make-A-Wish, which grants wishes for children with life-threatening illnesses.

Last year AJ collected more than 27,000 holiday letters to help the organization that made his dream become a reality.

The youngster has cystic fibrosis, a chronic and life limiting genetic disease that affects specifically his lungs and gastrointestinal system, according to his mother Kerryann S. Silvestri.

AJ was granted a wish five years ago by Make-A-Wish New Jersey, which involved traveling to Las Vegas to meet the cast of “Pawn Stars.” A.J. also got to meet the cast of “American Restoration,” a show also on the History Channel. The trip was a week after superstorm Sandy in 2012.

This year, AJ’s collection of 78,257 letters will play a significant role in helping Macy’s and Make-A-Wish reach their $1 million National Believe Day goal.

On Nov. 3, a special kickoff event took place at the Samuel and Josephine Plumeri Wishing Place in Monroe and the Macy’s at Freehold Raceway Mall to celebrate 10 years of the Believe campaign between Macy’s and Make-A-Wish.

Through Dec. 24, “believers” of all ages can mail a letter to Santa at the big red letterbox at any local Macy’s store or online at macys.com/believe. For every letter received in store or online, Macy’s will donate $1 to Make-A-Wish, up to $1 million, to help grant the wishes of children with critical illnesses.

Letters delivered on Dec. 8 counted for a $2 contribution per letter, up to an additional $1 million, bringing the total campaign to a possible $2 million.

Cittadino called AJ “a hometown hero” and challenged the youngster to collect 125,000 letters next year, which the youngster immediately agreed to answer the challenge.

AJ collected the bags and bags of letters this year with the help of the nearly 10,000 students, staff, and faculty members in the Old Bridge School District, who wrote notes and made holiday wishes.

The youngster was committed to beating his record last year and to giving back to the organization and he did just that.