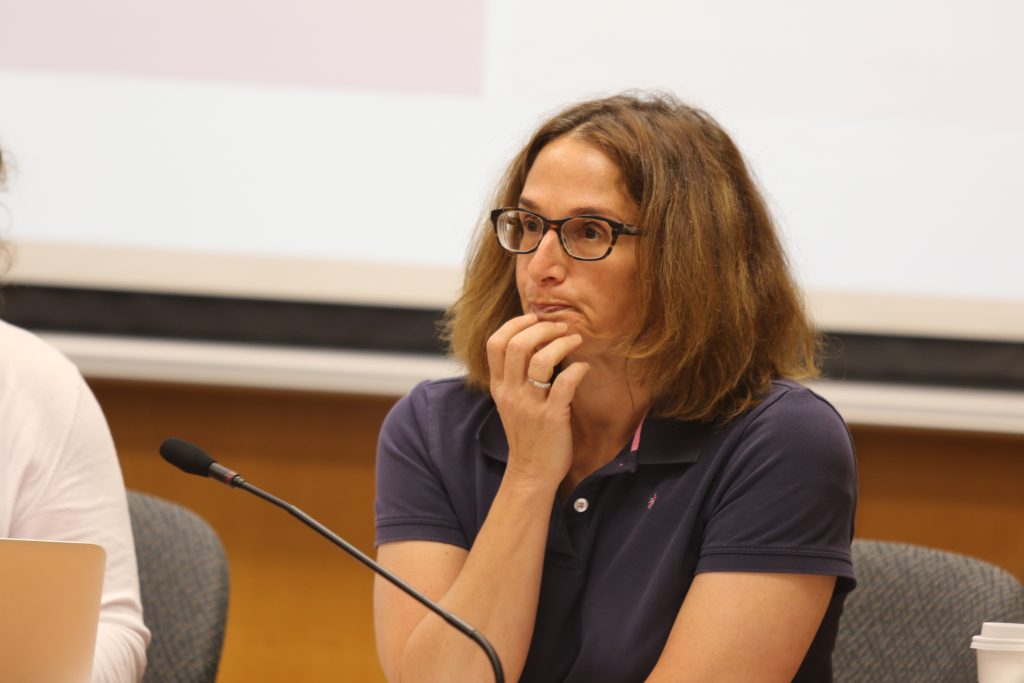 In a span of three years, Dafna Kendal went from being an outsider who felt the Princeton Public Schools Board of Education needed “new ideas” to an incumbent board member trying to get re-elected next month.

“I originally got involved in 2015 … when the teachers union was renegotiating their contract and I was frustrated that students were caught in the middle,” she said in an interview recalling her decision to seek public office.

Fast forward to 2018, and Kendal, 46, tried to make the case for why she deserves a second term.

“The board is doing a lot of great things and I’d like to continue,” she said. “I think my continued focus on keeping students at the center is important.”

She pointed to how, during her tenure, the board had reached contract extensions with all three of its labor unions through 2020, pushed back the start time of Princeton High School and reached a new contract with Superintendent of Schools Stephen C. Cochrane to keep him in Princeton through June 2022. Of the district’s schools chief, she showered him with plaudits.

“I think Steve’s doing a great job,” she said. “He cares very much about students and I think the other administrators see that. So for the three years I’ve been on the board, the district has become more student-centered, which I think is great.”

As administrators have tried to focus on student wellness, Kendal pointed to a survey that Princeton High School students had taken two years ago in which they reported not getting enough sleep and feeling stressed, among other findings. Following the advice of experts, administrators moved the starting time of high school to 8:20 a.m.

Asked if she favored starting the school year in August rather than after Labor Day, she said she was undecided.

On finances, Kendal said the Princeton Theological Seminary had increased its voluntary financial contribution to the school district and that the Institute for Advanced Study, for the first time, also had agreed to make a contribution.

She said she and other school officials have spoken to Princeton University administrators about how Nassau Hall could support the schools and said she hopes the university will contribute money directly to the district like the two other educational institutions do.

In terms of the skills she brings to the board, she cited her willingness to compromise. This year, she voted with other board members to settle the lawsuits the board had brought to fight the enrollment expansion of the Princeton Charter School. The board raised concerns about the impact of having to provide additional money to the charter school for 76 more students.

“While I understand the genesis of the charter school and while I don’t think Princeton is a community that fits the model for charter schools, the charter school is here,” she said. “I think the biggest issue comes down to money. I think that’s a state issue that pits the two school districts against each other and I think it’s really bad for the kids.”

She joined other board members by voting in October to put a $26.9 million facilities referendum on the ballot for Dec. 11.

Kendal was asked whether the school district was responsible for making the community less diverse through high school taxes driving residents out of town.

She said there is not much “wiggle room” to cut the school budget, with 70 percent of it tied up in employee salary and benefits, and said she believes officials have been “very prudent in our stewardship of the district.”

“I think this election is a turning point,” she said. “Are we going to, as a community, decide to continue to do what’s in the best interests of the kids, the students? Or are we going to focus on cost-cutting?”

On another closely watched issue, Kendal abstained from the vote to extend the district’s send-receive relationship with Cranbury for 10 years. She said officials received the final contract the Thursday before the Tuesday board meeting, with wording in the agreement still not finalized.

“I think it is a net-positive financially for Princeton public schools,” she said of the arrangement in which Cranbury pays Princeton tuition to send students of high school age who live in Cranbury to Princeton High School. “I think it would be a big fight, if not impossible, to sever the agreement just based on what our lawyers have told us.”

Kendal, a first-generation American, is originally from Edison and attended public schools in that Middlesex County community. She graduated from Lehigh University and Seton Hall Law School.

“I really owe all the opportunities I have to a good public education system,” she said.

Kendal has lived in Princeton for seven years. She said her family moved from South Brunswick so her two children could attend the public schools in town. She shared how her son has learning disabilities and his school in South Brunswick “was making it very difficult for (him) to receive the services he needed.”

“Moving was a pretty big, bold decision,” she said. “We are very happy with the education he’s received here and my daughter as well.”