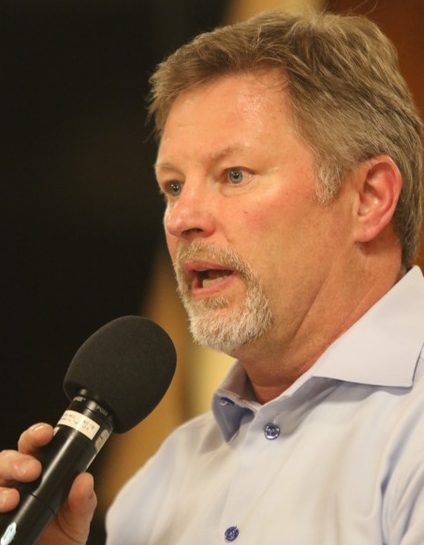 Brian J. McDonald came to Princeton in the late 1970s to attend college in a community where, 40 years later, he is trying to help lead the public school district.

He is one of five candidates running for the Princeton Public Schools Board of Education in the election on Nov. 6, when three seats are on the ballot. This is his first time running for public office.

“I’ve been committed to this community for two decades,” McDonald, 58, said in an interview.

He decided to run at a “really, really important time in the life of our schools” when the district faces “critical” challenges.

McDonald touched on the skills he would bring to the board if he wins, including his community service working with local nonprofits and the municipality.

With a professional background in finance, he called the pressure on the district’s operating budget an “important question that’s going to require a lot of hard work, a lot of tough decisions, a lot of prioritization in the coming years.”

“I think my skills, with respect to finance and working in large complex organizations, will be helpful,” he said. “I would also say that having spent 17 years on boards in the Princeton area and also serving as a secretary to Princeton University’s Board of Trustees … I have a good understanding of a board’s role, the importance of governance and the importance of working to forge consensus.”

In October, school board members voted to put a $26.9 million facilities referendum on the ballot on Dec. 11.

“I think this is a great outcome,” McDonald said after that decision was made. “The community gets to vote on a smaller package of critical needs while having more time to understand and validate the needs, stress-test the proposed solutions while considering alternate ideas suggested by residents, work to mitigate the tax impact, especially on our most vulnerable residents, and put in place a staffing plan to ensure that whatever projects are approved are delivered as planned, on time and on budget.”

Of the performance of Superintendent of Schools Stephen C. Cochrane, McDonald said he thinks the schools chief is “growing in the job.”

He grew up in Edgemont, in the community of Greenburgh, in Westchester County, New York. He came to New Jersey to attend Princeton University in 1978, took a year off to train for the Olympic trials as a swimmer and returned to resume his studies. He graduated in 1983 with a degree in history.

He worked in the financial industry after graduation, tried his hand as an entrepreneur by opening a New York restaurant called Trixies, went into the music industry and returned to Princeton University in 2002 as vice president of development, a job he no longer holds.

Asked if his alma mater should be making voluntary monetary contributions to the school district like other educational institutions in town do, McDonald said the university leaves more than 20 properties on the tax rolls that otherwise would be tax-exempt.

“I’m just saying people are not giving them credit for what they are doing,” he said. “That doesn’t mean they can’t do more or shouldn’t do more.”

McDonald has lived in Princeton with his family for 23 years. Two of his three children are products of the public school system, while the third is a student at Princeton High School.

“I think the public schools are very good,” he said.

Of the high school, he said he thinks the experience varies “dramatically from student to student. For some, it’s excellent and for some, it’s not.”

“I believe there are three persistent problems that exist in our community that are particularly evident in our high school that mirror three great issues of society,” McDonald said, listing those problems as racism, inequity and income inequality.

He cited, for example, that there has been “differential punishment that correlates to race.”

He said New Jersey’s funding formula for charter schools “puts too much stress on the local communities that house them.”

McDonald believes that for the community, “rather than argue” whether the Princeton Charter School should exist or not, “we would be much better served to work together and advocate for more equitable funding from the state.”