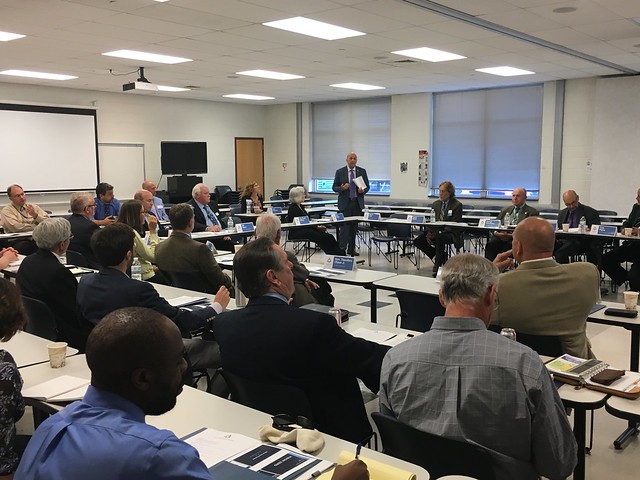 Hillsborough Township municipal officials served as the hosts to a county meeting where they discussed updates on local infrastructure projects.

Hillsborough Township officials held the Central Jersey Transportation Forum at the Somerset County Fire Academy Training Building on Sept. 18, where Hillsborough Mayor Frank DelCore attended to highlight the Route 206 bypass update as well as other infrastructure updates in the township.

DelCore said in a released statement that the project to date has been a collaborative effort between the municipality, the New Jersey Department of Transportation (NJDOT) and county officials.

“The Route 206 Bypass in Hillsborough project is a great example of what can be done when organizations work as a team,” DelCore said in a statement. “This project involved collaboration from the DOT, Somerset County and Hillsborough Township”

Earlier this year, Hillsborough Township was recognized by the New Jersey Alliance for Action in conjunction with Somerset County for the Route 206 bypass project as a “Leading Infrastructure Project.” The program was initially created to highlight innovative, forward thinking construction initiatives that have a positive impact on the state’s economy.

Officials said the bypass project, along with other improvements planned for the Route 206 corridor, are aimed help advance the township’s town center plans and improve mobility for residents and commuters.

According to township officials, the Route 206 project was first considered as early as the 1970s, as the community began to develop. Officials said that it remained only a concept until the early 2000s, but near the end of 2006, the NJDOT was called to remove the “no-build” scenario from the bypass plan. Following the necessary environmental studies, officials said that in June 2007, the “no-build” scenario was lifted from the plan and an official design was presented to the Hillsborough Township Committee.

By August 2010, township, local and state officials joined together to break ground and officially start construction of the Route 206 Bypass, mid-section. At the time of the groundbreaking, officials noted that the planning stages for the second phase, known as “Contract B,” had an estimated start date of 2012.

However, by March 2012, the DOT confirmed that the project timeline would exceed what was originally anticipated. They also reaffirmed its commitment to the completion of the project, according to officials. Officials said that construction of the final phase of the bypass will begin in the Spring 2019, with the anticipated completion in 2020.

At the September meeting this year, DelCore concluded the event with recent paving projects in progress around Hillsborough Township. DelCore explained that the intent of the municipality’s investment in its infrastructure is to ensure that commuters have “better access to major state and county arteries, such as the ones supported by the Central Jersey Transportation Forum.”