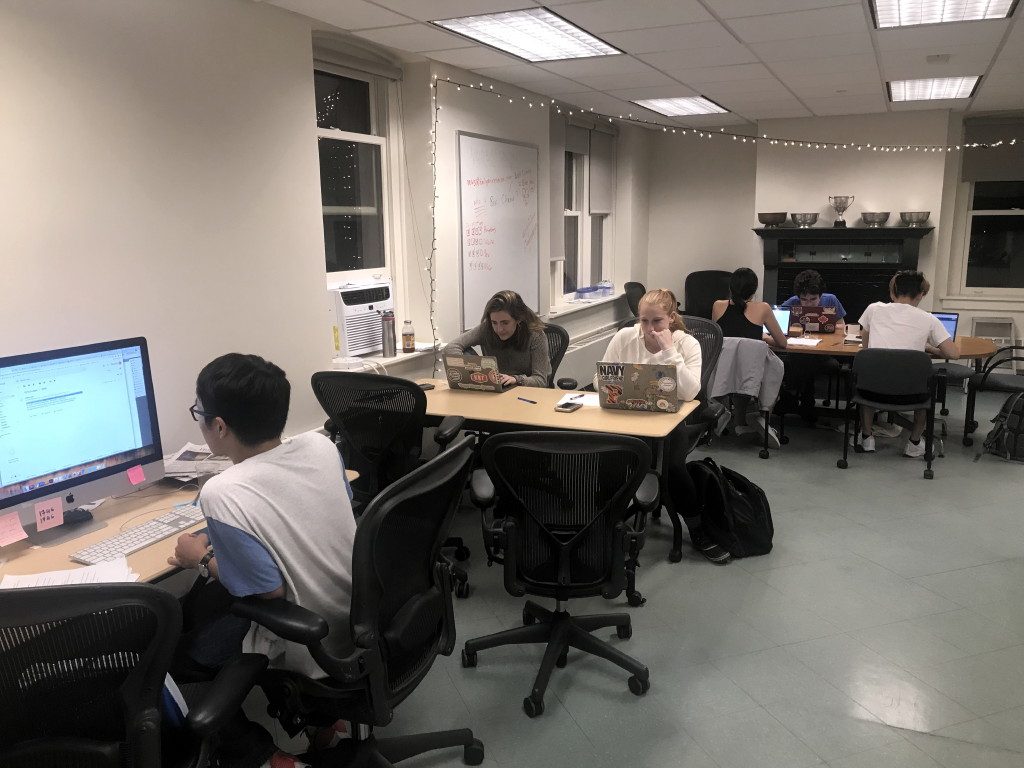 "The Daily Princetonian" staff huddles in their production room as they prepare for a night of production on Oct. 14.KEN DOWNEY JR./STAFF
× 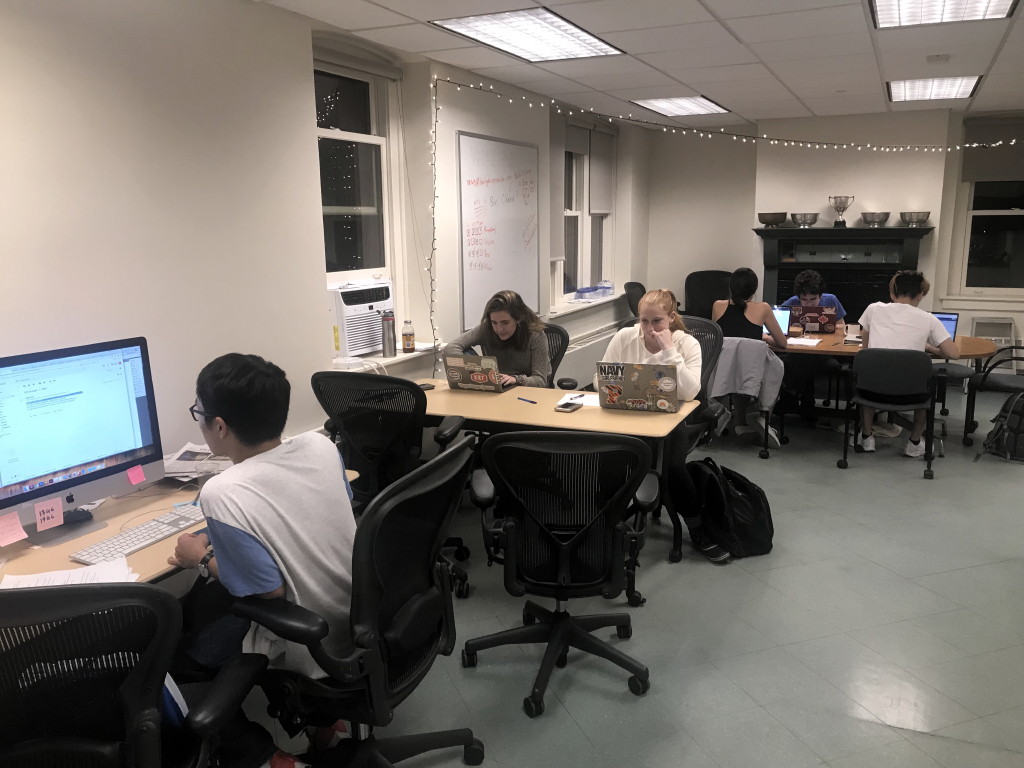 "The Daily Princetonian" staff huddles in their production room as they prepare for a night of production on Oct. 14.KEN DOWNEY JR./STAFF

From “The Princeton Packet,” “Planet Princeton,” “ECHO,” “U.S. 1,” among others – the town of Princeton does not fall short in the news department.

With several outlets in the area, there is only one that has daily coverage.

Housed at 48 University Place on the first and second floors, a team of several students works tirelessly every day and night for nothing more than seeing a byline in print the next morning.

“A lot of our staff is very proud to say that we are the only daily paper in the area,” said The Daily Princetonian’s Editor-in-Chief (EIC) Chris Murphy. “From a college standpoint, we are one of the only remaining daily university papers and we take pride in printing daily. I think for the staff it’s just a motivational tool.”

Murphy, a senior at Princeton University, began his tenure at The Daily Princetonian his freshman year as a sportswriter. Covering both men and women’s basketball, in addition to baseball, Murphy worked his way up to become an associate editor and then head sports editor by the end of his sophomore year.

Murphy described the transition between each position as relatively easy, with the only difference in his job being the increased responsibility. But after Murphy was chosen as The Daily Princetonian’s 143rd EIC, his outlook on the paper had shifted.

“The transition from sports to EIC was very interesting because it is something that I hadn’t experienced in the sports setting, like dealing with the entire paper as it comes together,” Murphy said. “The transition from thinking about things just in section-specific terms to now having to think about not only the day-to-day operations of the paper, but the long-term goals we have and figuring out how to best approach those, was a lot.”

But Murphy, as well as his staff who he frequently credited, uses the success of the newspaper to encourage himself and others to keep pushing forward.

“There are times when the news process as a whole gets more difficult, but having this reputation and having this responsibility to our readers to continue to output newsworthy content is one of the key motivations to continue our sustained success as an organization,” he said.

The tenure of an EIC runs on a yearly calendar basis. Voting takes place in December of each year for the incoming EIC to begin in the spring semester.

“The reason why we do that is it makes it easier for the transition because that outgoing EIC will still be on campus and be able to help the incoming one,” Murphy said. “I had the benefit of remaining in constant contact with the previous EIC for a couple of months before I was on my own.”

Being that the workload of a student is a full-time job in itself, especially being one at an Ivy League institution, the added workload of a newsroom can be another job.

“I think the biggest thing for me as I transitioned to EIC, was the idea that the paper and school, while they are together and obviously related, the best thing for me was to keep them independent from one another,” Murphy said. “I can’t be stressed about schoolwork when I’m focusing on the paper and vice versa. I think being able to manage that time process and be able to stay on top of my schoolwork during the morning and afternoon hours, so when I come in at night, I’ll be able to focus just on this. It’s nice to have a staff of very strong writers and editors where we’ll be able to pick each other up when one of us has a lot more schoolwork during the week.”

The daily outlet has a set schedule that each student writer must adhere to regularly. For production nights, which are every night from Sunday to Thursday, the collective staff meets from 7:30 until midnight each evening where they put together the next day’s paper.

A deadline set in the early afternoon each day, each writer’s story goes through a vigorous editing process before the piece is sent through to production. Going to the specific section editor first, a story is then passed to the copy editor who checks facts and style, until it is then passed off to a managing editor who gives the story a final read before publishing.

“That process repeats for about 10-15 stories a night and at the end of the night we’ll export our pages and be happy to wake up the next morning and see our paper,” he said.

During the summer and winter breaks, The Daily Princetonian staff makes sure to update its website regularly, but not having any students to give the paper to each day, a long form version of the paper is held off until the first week back at school and handed out as a package to incoming freshmen.

“We take the same process that we do on a nightly basis here and do it over the [break], except that we’re hundreds or thousands of miles away from each other,” he said.

Whether on campus or a thousand miles away, “The Daily Princetonian” makes sure to get the news out there every single day.