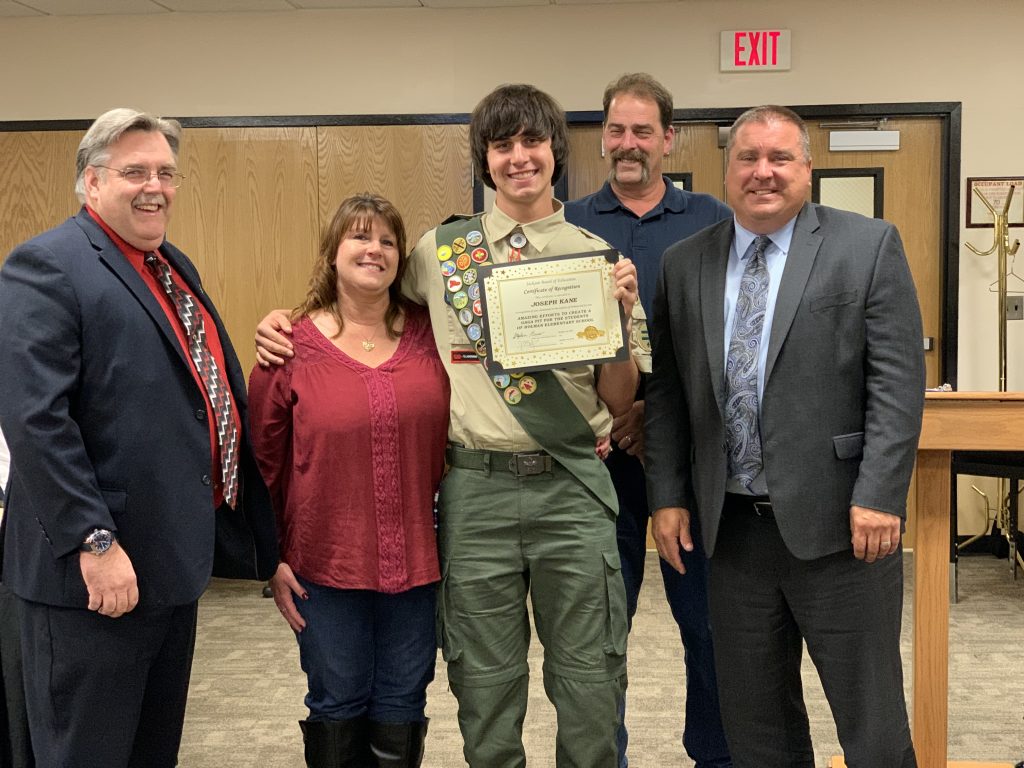 JACKSON – Students at the Lucy N. Holman Elementary School are going “gaga” over the newest edition to their playground–all thanks to a former student.

Joseph Kane is in 10th grade now, but not long ago he was a fifth-grader at Holman. Joseph is a Boy Scout and when it came time for him to choose a project as part of his effort to attain the rank of Eagle Scout, he remembered where he came from.

“It feels great. I was worried Gaga was too obscure of a game and that none of the students would use the Gaga pit, but I hear it’s a hit and I’m ecstatic about it,” the young man said.

The project took more than a year of preparation.

“Completing the project has been very rewarding. More than a year of planning, designing, prepping and paperwork has gone into the project, and seeing it finally come together feels amazing,” Joseph said.

“Mostly though, it’s the students’ reactions that made completing the project feel as rewarding as it has. I have received dozens of thank you letters, had friends tell me how much their younger siblings like it, and heard it from the students firsthand, and it has made every second worth it,” he added.

Joseph collaborated with Principal Rich Karas and came up with an idea to build a Gaga pit at the school he once attended.

“This project is so well done, it’s amazing,” Karas said. “Joseph was so conscientious about every aspect of it and the students here are just absolutely loving what he has done for us. They literally run to it every single day.”

Joseph used recycled pieces of the Point Pleasant boardwalk and his own two hands to build the Gaga pit. The pit is an octagon-shaped arena where students try to eliminate each other by rolling a ball and tagging each other out.

Joseph was recently honored by the Jackson School District Board of Education, which recognized his effort to construct the Gaga pit at the Holman school.

“On behalf of the board, I would like to thank Principal Karas for working with Joseph as he created this project,” said John Burnetsky, the board’s president. “We are so happy to recognize Joseph, not only for his efforts to provide this amazing feature to our school, but for showing us all the value of community service and giving back, because that is the true gift.”

Joseph is not yet an Eagle Scout, but completing the Gaga pit was one step on his road to earning the highest rank in Boy Scouting.

“The Gaga pit was my Eagle Scout service project, which is only one of the requirements to become an Eagle Scout, though likely the single largest requirement.

“I need to complete two more merit badges in order to become an Eagle Scout, both of which I am about halfway done with.

The young man said he hopes to hold his Eagle Scout Court of Honor within several months of completing the review process.