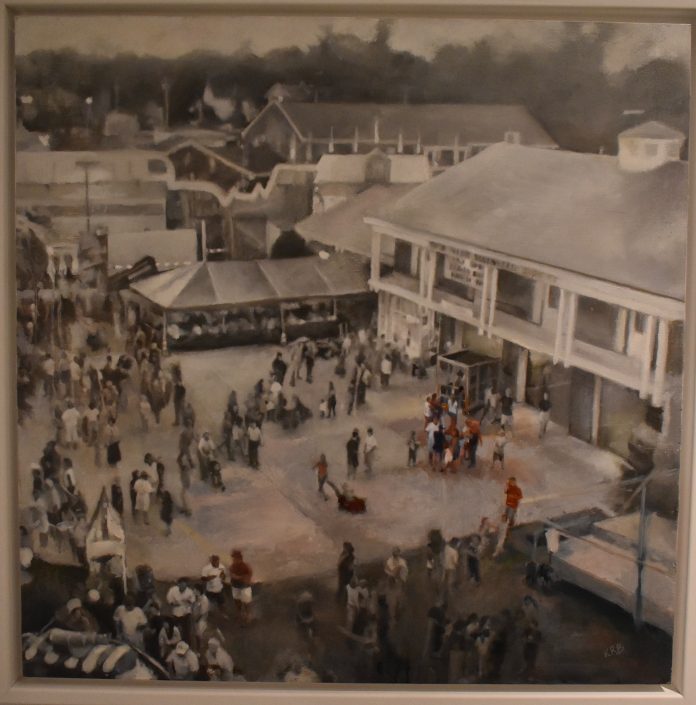 Kathleen Beausoleil of Fair Haven converts her anxieties into art and said in an interview that “my artwork is a way for me to communicate and sort of hide.”

The exhibition runs from now through March 15 at the Monmouth Museum on the Brookdale Community College campus in Lincroft.

The Juried Art Exhibition was founded by the Monmouth County Arts Council in 1979. There has since been an international call for entries and the show has featured artists from Japan, Russia, Lithuania, Israel and Germany, according to the museum website.

During the annual exhibition, artwork of diverse mediums and styles is featured in the main gallery.

Beausoleil, a 13-year resident of Fair Haven, said “Fireman’s Fair” is an ode to her own experience with social anxiety. Beausoleil, who is accustomed to painting crowds of people, said the work was inspired by a visit to Fair Haven’s annual summer fair.

“I pretty much focus (my art) on crowds,” the artist said. “… The crowds (in my art) are from my normal life … I think I focus on people because I have a little bit of social anxiety. It’s like, I always want to go to the party and be having fun, but when I get there, I realize I’m a little bit more of an introvert.”

Beausoleil, who refers to herself as “a complete art geek and nerd,” said she is drawn to oil painting. “Fireman’s Fair” depicts an aerial view of people at the festival.

The artist referenced a photograph she took from the top of a Ferris wheel at the fair. However, Beausoleil said she did not want the painting to appear identical to the photograph.

In the painting, Beausoleil uses neutral tones to imitate a realistic aerial view of the Fair Haven Fire Department and adjacent buildings. The artist used gray and black hues and some warm colors to highlight select people in the crowd below.

“When you have kids you are kind of forced into doing a lot of (social) things,” Beausoleil said, adding she is working on a piece that focuses on a crowd at a swim meet. “If I am sitting (at the swim meet) drawing, I have something to do when I’m in that situation.”

Beausoleil, who said her husband is a “baseball fanatic,” said his love of sports sparked her interest in “group culture.” She began painting crowds at baseball games. She has photographed images of stadium crowds she viewed on television and artistically replicated the scenes.

Alongside “Fireman’s Fair” is a diverse array of talent and varying subject matter.

The artwork featured in the museum’s current exhibition was selected by Keyport resident and artist Grace Graupe-Pillard, who said she selected about 72 works of art from 500 international submissions.

Discussing the art she selected, Graupe-Pillard said, “I have had a tremendous amount of experience when looking at art. I know when I feel something has a presence. There is a presence to their work. It’s not about being a virtuoso or how great your skill is. It’s not about (skill) because that can be learned.

“It’s about how (an artist) makes a work of art that feels honest and personal. It is not about art that looks like everybody else’s art. I chose works that, with my eye, my taste and experience, felt really relevant to me,” she said.