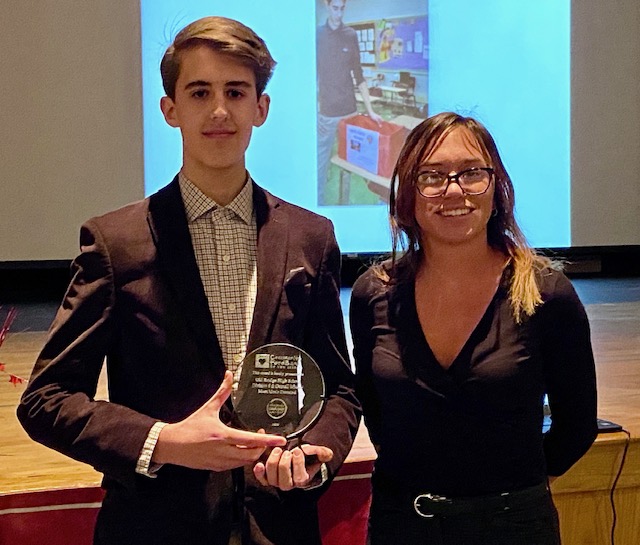 OLD BRIDGE – Matea Mandic, a sophomore at Old Bridge High School, recognized the severity of hunger and the importance of food for high school students.

He initiated a campaign with the help of the school’s Red Cross Club and collected 5,497 pounds of food for the local food bank, according to information provided by the Old Bridge School District.

“Nutrition is important for us,” said Matea. He explained that without food, it becomes difficult for students to study and work, and it makes them susceptible to disease.

Diana Levy, Schools and Community Outreach manager for the Community Food Bank of New Jersey, presented a trophy and certificate to Matea on Feb. 5 at Old Bridhe High. His efforts led him to win the Student Changes Hunger Competition at the school.

The sophomore placed labeled boxes around the high school, including in classrooms, the cafeteria, and front desk for the collection of non-perishable food as well as canned goods. He also solicited local bakeries and other food businesses to donate to the collection, which ended on Dec. 9.

Matea was also selected as part of the Teen Leadership Council for the Community Food Bank of NJ, one of only 10 students state-wide, who was named to the committee.

After watching the presentation, Old Bridge High Principal Vincent Sasso charged members of The Red Cross Club to find something they each feel passionate about and “go with it and take the next step by putting it into action,” according to the statement.

The Federation of New Jersey Food Banks challenges all students, staff, teachers and parents to think of those less fortunate throughout the school year by organizing a food drive at their school, according to the Students Change Hunger Challenge website.

The food was collected and weighed at the local food bank at the Cavalry Chapel Church, located off Route 516.

The New Jersey Federation of Food Banks distributed more than 89.2 million pounds of food – the equivalent of 74.3 million meals – across New Jersey in 2017, according to the Students Change Hunger Challenge website. The food is delivered to children, families, senior citizens, and veterans in the Garden State.