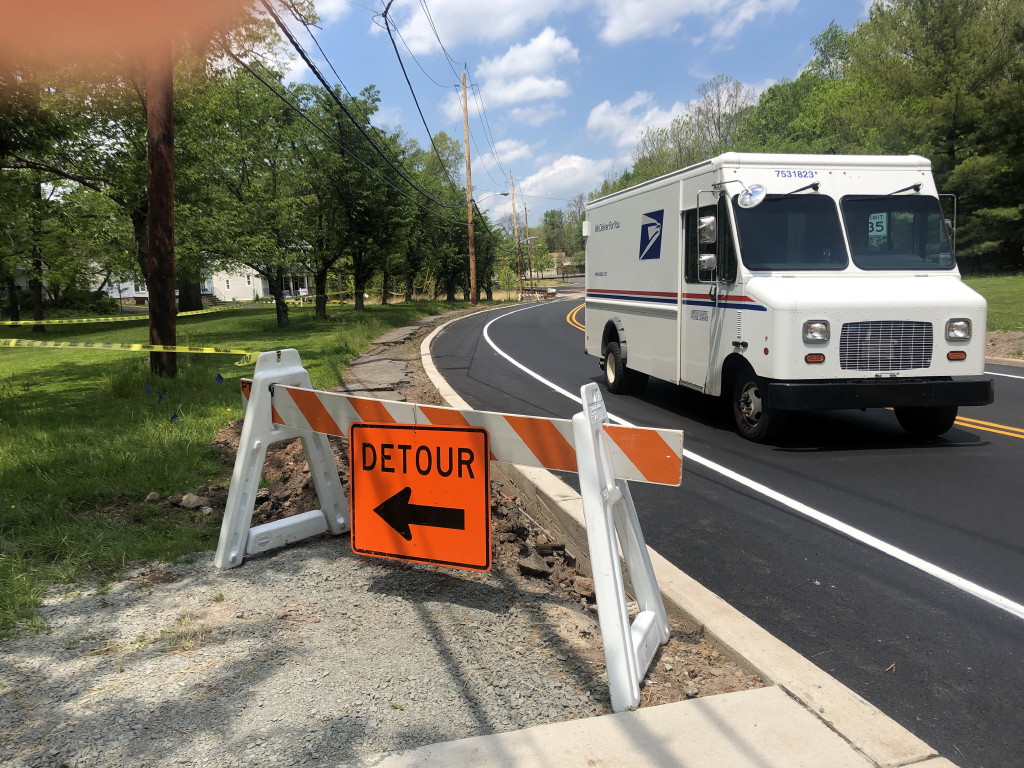 Alexander Road opened on Friday, May 15th with a whimper relative to the loud commotion that took place more than six weeks ago when the closing occurred. Pictured is a mail truck using the newly accessible route to deliver goods to Princetonians sheltering in place during the pandemic.
×

Alexander Road opened on Friday, May 15th with a whimper relative to the loud commotion that took place more than six weeks ago when the closing occurred. Pictured is a mail truck using the newly accessible route to deliver goods to Princetonians sheltering in place during the pandemic.

In hyperbolic language similar to what I hear from my six-year-old grandson, several of my friends declared a few months ago that Nov. 6, 2019, was the “worst” day of their lives. It was the day Alexander Road closed. Christmas was going to be ruined for Princeton downtown retailers, the Grinch would steal all the spirited celebrations such as the Palmer Square tree lighting, getting in and out of Princeton during Communiversity (town/gown arts festival at the end of April) would be beyond nightmarish, and everyone would miss important business meetings, train departures, medical appointments and soccer games.

Six months and one week later, Alexander Road opened on May 15 to the tune of “whatever.”

“The construction is a huge accomplishment,” said Princeton Police Chief Nick Sutter, referring to the concurrent Mercer County and New Jersey Department of Transportation (DOT) projects that replaced three bridges over the D&R Canal, the Stony Brook and Alexander Creek. “It took massive coordination at all levels of government and great engineering skill,” he said.

The project also generated a tsunami of controversy. “We did several press conferences and community presentations. People were writing letters to the elected officials and the newspapers on a regular basis,” all communications expressing intense concern about the consequences of a six-month closure of such a major artery in and out of Princeton, said the chief.

But that brouhaha was the good old days. COVID-19 has far upstaged Alexander Road on the scale of human suffering. Hardly anyone missed a train, because no one was commuting. No one was late for a soccer game, because they all have been cancelled. Only a handful of people cared about getting to the stores downtown because most are closed. Communiversity was cancelled, eliminating congestion nightmares. And there has been little traffic on the other arteries in and out of town, thus no problem for those needing access to the hospital. According to the police chief, the one thing the COVID crisis has given us is perspective.

I try to talk with Chief Sutter on a regular basis to get his update on life in Princeton from a public safety perspective. We last spoke at the end of December after the tragic death of The Jewish Center of Princeton’s Rabbi Adam Feldman, a very close friend of Chief Sutter’s.

“I was devastated when he died, but this COVID situation takes devastation to a new level. It has changed how all of us approach life and certainly has changed policing.”

Only two police officers were confirmed to have had the COVID-19 virus, but the unofficial numbers might be much higher, said the chief.

“In February, a lot of people were sick in the department. It is not uncommon to have the flu affect a lot of the staff at once, but this seemed more intense. Our antibody tests we now are conducting are coming back with a lot of positives, so it is likely we had more cases than we thought. I am just so grateful that everyone is okay.”

The changes in policing, however, have gone far beyond sitting six feet apart. To limit potential exposure to the virus, the department operated in shifts. Community policing, essentially ceased to exist.

“When in our shift-operational phase, we could provide none of the extras – no robust social media, no pedestrian safety enforcement, no more community meetings or outreach to the youth in the community. But activity in town was at a standstill, so it was okay,” he said. “For the past several weeks, the police call volume has been down, especially in the central business district. Accidents involving cars have been reduced by 50%. Incidents of crime also have gone way down.”

But as stores open, traffic – pedestrian and vehicular – increases, human interactions increase, the parking stresses increase with curbside pickup, and police activity will increase. There are also mental health issues, the chief noted; anger/anxiety/fear/frustration may play out in different ways among the residents.

“The health and economic pressures are overwhelming. Transitioning out of this shutdown situation will be tricky. We never had a playbook for a pandemic. As a department, we are very good at handling emergency events, such as devastating storms or other disasters. These events have a limited timeframe; and therefore, the operational adjustments are for a defined period of time. After a tough storm, for example, we generally are back on our feet in two weeks. In this pandemic situation, no one expected this, and no one has a playbook for returning to normalcy. We are mapping out our playbook as we go along.”

Thus far, said the chief, the residents seem to be accommodating all the COVID transition protocols. “People seem respectful and well informed. We have gotten only a few complaints about social distancing, and everyone has been cooperative. Generally, breaking the protocols has been the result of carelessness, not civil disobedience. People seem to be paying attention and respectful.

“Unlike in some communities, we haven’t had to police large congregations of people. Graduation time may be challenging. My heart bleeds for the graduates and their parents,” said the father of three boys, 16, 13 and 10 years old.

“We have to remain nimble and flexible and expect the unexpected. I am very enthusiastic about normalcy, but with that we must be prepared for unanticipated consequences,” Chief Sutter said.

From his perspective, it will be great to get back to the gym (no matter what the COVID-related rules) – and to listen to complaints about too much traffic on Alexander Road.