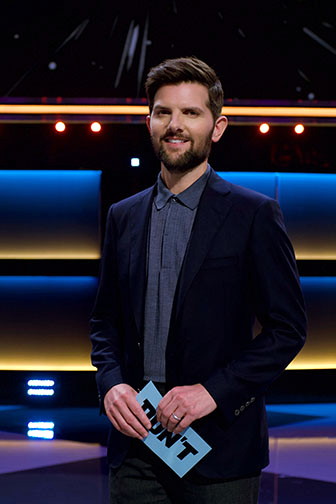 In this time of uncertainty and confusion, it can be hard to do anything at all. In fact, it might be easier to do … nothing? That’s the point of ABC’s new game show Don’t, (Thursdays, beginning June 11). Contestants earn money — up to $100,000 — by not doing different actions. For instance, one segment is called “Don’t Blink,” where players lose money from their bank each time they blink. Oh, but did we mention a fan is blowing in their face?

This crazy idea for a game show comes from the mind of Ryan Reynolds, who recruited Adam Scott (Parks and Recreation) to host. “It’s the sort of thing I never for a second saw myself doing,” explained Scott. “It was never a vision of mine to host a game show. And honestly, when it came across my desk, my first reaction was just a quick ‘No.’ … But the fact that Ryan was involved, and the idea that comedy would be a big part of the show as well, was interesting to me. And the thought that what they had in mind was sort of a meta, kind of self-aware game show, in a way — a game show that was acutely aware of how ridiculous it is. And so, it just went from there, and it was a great experience.”

Scott also highlighted one of his favorite segments from the show. “So, ‘Don’t Drink’ — it has nothing to do with alcohol. We’re fine with people drinking heavily while watching or participating in the show,” Scott deadpans. “This is about having a person get on a treadmill that is under a heat lamp, and we feed them increasingly spicy foods and present them with increasingly enticing beverages and see how long they can go while not succumbing to the relief that the beverage will bring.”

Being a game show host was a new experience for Scott, but something that surprised him the most was how involved he found himself in the goings on of the game around him. “I have to say, one thing I was not expecting was how caught up in the game I would get, because I really want these people to win. It’s a good chunk of money. And you really want these people to be able to go home with something in their pocket. Everyone who played were such lovely, nice people.”