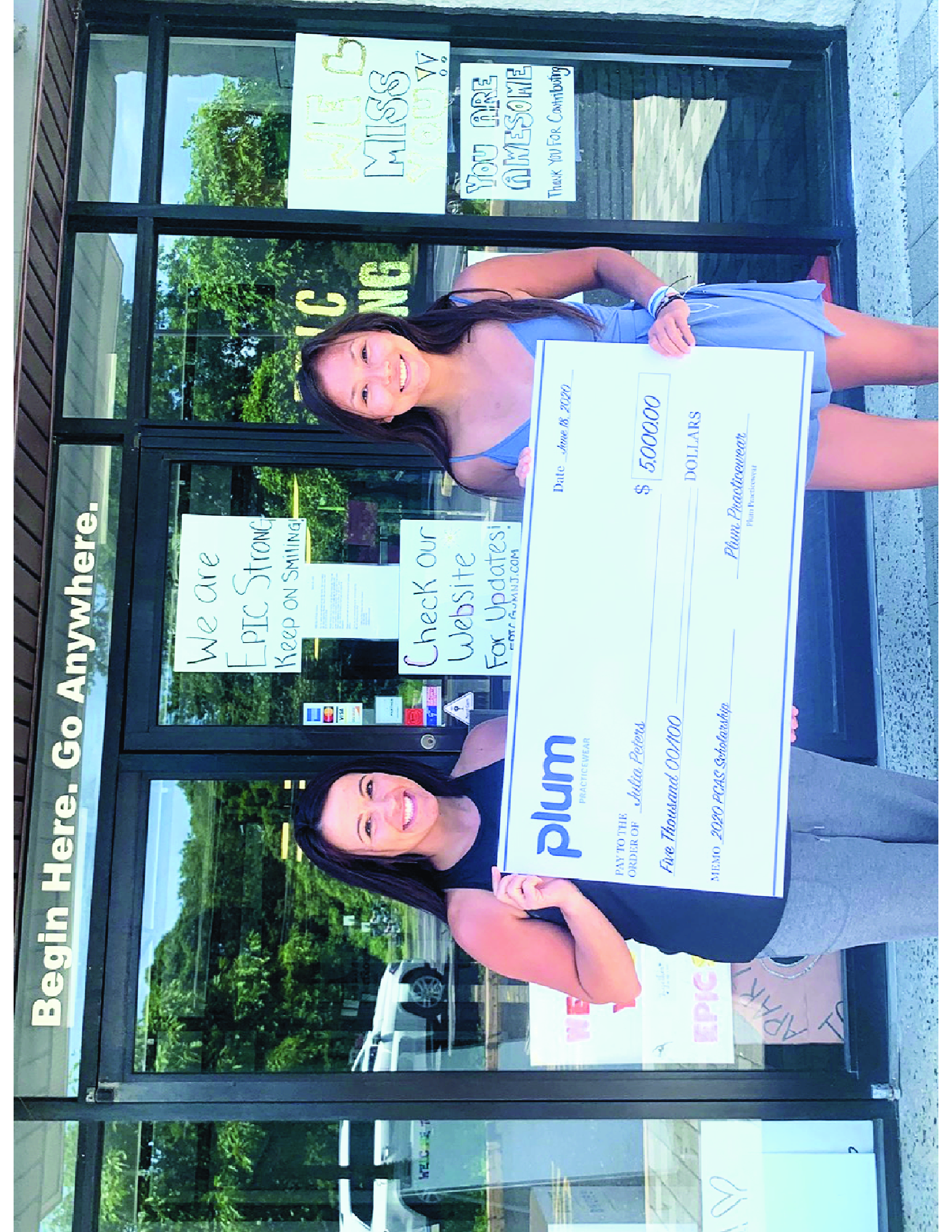 Julia Peters of Pennington is the recipient of the 2020 Plum Cares Academic Scholarship (PCAS). This one-time scholarship, totaling $5,000, will support her academic studies at George Washington University in the fall, where she will pursue physics and compete on the varsity gymnastics team.

Peters is a graduate of The Pennington School and finished as a USA Gymnastics Level 10 gymnast from Epic Gymnastics in Manasquan. Early in her gymnastics career, Julia found herself, like many in her sport, having to overcome fears of landing each skill in competition. But through one physics class, where she learned of the bravery of scientists who approached the unknown head-on, she began to apply that reasoning to gymnastics, according to information provided by Plum Practicewear.

“In order to be successful, I had to bravely approach what I perceived to be my limits as an athlete, this was the only way I could possibly transcend them,” Peters said in the statement regarding how gymnastics has prepared her for the future. Beyond feeling “at home” through the sport, she has found the same love and interest in physics after that class. “I love a good challenge, and I have devoted much of my athletic and academic careers to exploring the fullest extent of my capabilities,” she said in the statement.

Kaitlyn Grasso, Epic Gymnastics owner, said in the statement, “All of Epic Gymnastics’ coaches are so proud of Julia. A competitive team member, and a successful, driven, goal-oriented individual, Julia’s courage and can-do spirit, along with perseverance and desire to accomplish more, drive her ability to be the best she can be. We know she will go far.”

When Julia wasn’t in the gym or classroom, she was still devoting a significant amount of time to the same places that have helped her mature over the years, according to the statement. For the past six years, she volunteered at Special Olympics gymnastics meets, running scores, playing floor music, and assisting judges. At The Pennington School, she showed her pride by leading tours to prospective families and was editor-in-chief of both the school literary magazine and newspaper. But her services and extracurricular activities didn’t stop there with several hours spent at American Red Cross blood drives, HomeFront holiday events, and The Village Salon.

“Karma has its way of working its magic. Our Plum Cares Collection was inspired in 2016 by New Jersey gymnast, Emily McGill, who was diagnosed with Hodgkin’s lymphoma. Our goal for this program was to raise funds for causes and give back to our gymnastics community, including the PCAS scholarship, which has totaled over $100,000 to date. Today, as our community is uniting to survive difficult times, it is humbling that our winner, Julia Peters, is not only from New Jersey, but she attended the same gym that Emily attended. Julia embodies character, passion, commitment and compassion – qualities of a leader. Plum is so proud of her accomplishments and we know she will inspire the next generation of student athletes,” Debra Rizzi, Plum Practicewear partner and vice president of marketing, said in the statement.

This past April, Plum Practicewear, an online retailer of gymnastics apparel and accessories based out of Kenilworth, opened its application process for its 3rd Annual Plum Cares Academic Scholarship. The scholarship was made available to graduating high school seniors who could be identified as a competitive gymnast within one of the following disciplines: artistic, rhythmic, acrobatic, tumbling and/or trampoline. Applicants were required to complete a written essay, provide a copy of their most recent report card, and demonstrate individual excellence in areas such as volunteer/work experience, extracurricular activities, and academic performance. All applications were evaluated upon a 100-point rubric that were based upon the following criteria: academics (grades/essay) = 60 points, extra-curricular/volunteerism = 30 points, and attendance = 10 points. Close to 70 applications were received across the country.

To learn more about the Plum Cares Academic Scholarship, visit PlumPracticewear.com. Applications for the 2020 scholarship program will be announced in April 2021.