Driver Ake Svanstedt sent her out to the front early on, leading the four-horse field in the early going, according to a press release.

Ab’sattitudeexpress, an impressive Sire Stakes winner two weeks ago, kept her honest. She stayed right on the heels of Common Sense S while drafting in the pocket, as Common Sense S set fractions of 28.0, 57.0 and 1:26.2 in the one-mile race.

As the horses rounded the final turn, George Brennan pulled Ab’sattitudeexpress off the pylons and it looked like she would give Common Sense S a challenge.

However, she broke stride, leaving Common Sense S all alone on the lead. From there, Svanstedt’s filly crossed the wire well out in front, stopping the clock in 1:55.2.

For Common Sense S, it was her second win in a row, having won at Freehold the previous week. Her time matched the track record, previously set by Bee Line during the 2006 New Jersey Sire Stakes. Ake Svanstedt also trains and co-owns the winner with SRF Stable.

Never Late Kait, Alyvia Deo, and Ab’sattitudeexpress rounded out the order of finish. There was no wagering offered on the race.

Later in the day, two divisions of the second leg of the New Jersey Sire Stakes- Standardbred Development Fund for 3-year-old male trotters was held.

The first leg went to Gerard, who opened up a big lead early on and held on to win by two lengths. Eric Abbatiello drove him, for owner This N That Stable and trainer James DeLucia.

In the second leg, Kasha V won for the second week in a row, wearing down early leader Kixton Hanover and holding off late-charging Kyrie Deo to win by two lengths.

Kasha V is owned by Theologos Moutafis, trained by Tom Corelli, and driven by Austin Siegelman. His final time of 1:57 was more than two seconds faster than Gerard’s. 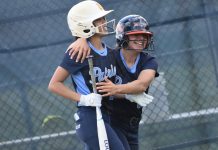