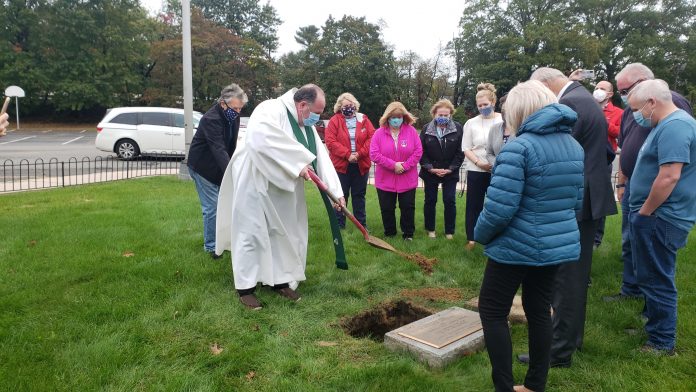 OLD BRIDGE – With the excavation of a time capsule buried 25 years ago, the festivities for St. Thomas the Apostle Parish of Old Bridge for its 100th anniversary has begun.

The time capsule was buried on Nov. 3, 1996, at the direction of the Rev. Monsignor John B. Szymanski and the Most Rev. Edward T. Hughes, bishop of Metuchen at the time. The capsule informs the clergy to open the time capsule in November 2021.

“We will clean it up and it will be displayed in the vestibule,” Father Jerome A. Johnson said as he dug up the time capsule on Oct. 13 with church members, students at St. Thomas The Apostle School and Mayor Owen Henry.

At the conclusion of the 100th anniversary celebration, the time capsule will be opened up and new items will be placed inside and buried for the 125th anniversary.

Johnson said the coronavirus pandemic curtailed a larger celebration; however, the church will have historical displays, church tours and a gala, which Johnson said he hopes Bishop James F. Checchio, current leader of the Diocese of Metuchen, will be able to attend.

Szymanski, who became the fourth pastor of the church in 1973 and retired in 2007, wrote a book “Toward New Horizons” on the history of the church. The year 1921 marks the beginning of St. Thomas the Apostle Parish of Old Bridge. Charlotte Elizabeth Hurtzig donated three acres of land located on Chestnut Street in the East Brunswick side of Old Bridge.

Hurtzig’s gift of land was of a major significance. The site was located at the entrance to the district of Old Bridge, where for generations, Catholics were not known or welcomed, Szymanski said. It was also located adjacent to the Chestnut Hill Cemetery, wherein it was prohibited to be a burial place for Catholics, he said.

In 1951, Middlesex County was experiencing a population explosion. Saint Thomas the Apostle Parish had slightly more than 200 Catholic families. There was a critical need to accommodate the rapidly growing weekly parishioners. Most of the newcomer families had young children whose families were seeking to enroll their children in a parochial school.

On July 12, 1959, under the pastorage of Father Walter Aloysius French, a new parish church, auditorium, school and rectory were constructed on 11.7 acres of land along Route 18 in what was then Madison Township. The project was completed in 1960, a little less than a mile from the original St. Thomas the Apostle Church.

The church today in the Diocese of Metuchen currently has approximately 4,700 families.