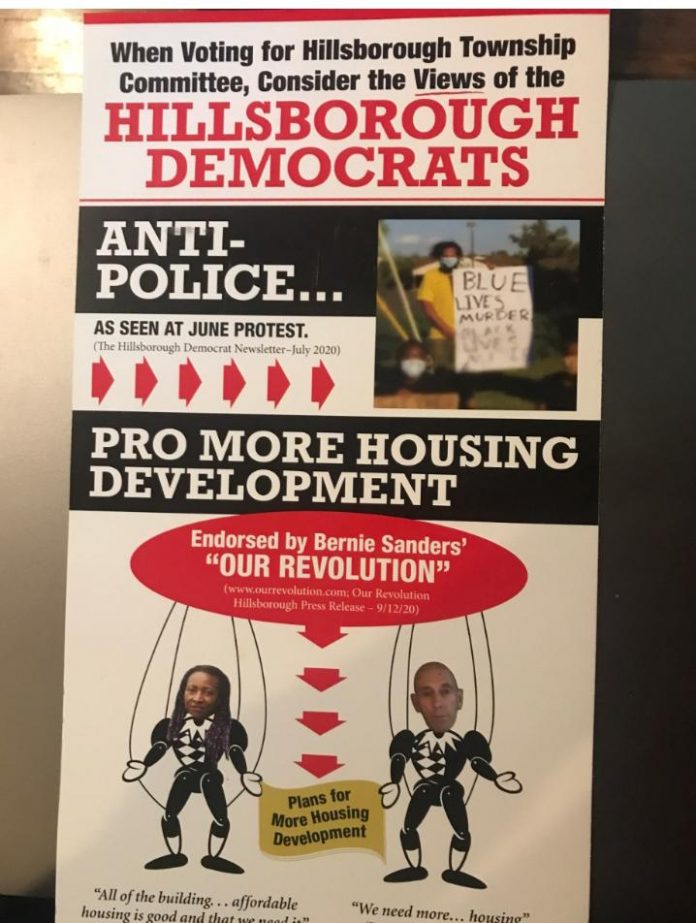 HILLSBOROUGH – This past week, Hillsborough Township Committee candidate Donnetta Johnson said she was “stunned” to see a double-sided flier she says was sent out by the Somerset County Republican Organization attacking her and running mate David Brook.

One side of the flier in question shows both Johnson and Brook being portrayed as puppets at the strings of the organization Our Revolution that is endorsed by Bernie Sanders. It also is referenced in the advertisement that Johnson and Brook support ”Pro Housing Development” and are “Anti-Police”.

Johnson calls the accusations submitted in the flier as “false rhetoric” and felt unsafe seeing the graphic of her and Brooks on puppet strings, saying it is an example of “race-baiting”.

“I am saddened and horrified by the blatant lies and misrepresentation of myself and my campaign,” Johnson said in an exclusive interview with centraljersey.com.

“It’s insulting to my accomplishments as a businesswoman and goes as a misrepresentation of who I am as a person. For our opposers to use race-baiting and lies to mock our campaign is something that the Hillsborough community does not need in its regrowth.”

The flier came as a “kick in the gut by a friend,” in the words of Johnson, who said she had an understanding with Hillsborough Township Committee candidates, Mayor Doug Tomson and Janine Erickson, that there would be no negative campaigning. Each campaign would be based on the issues each candidate wants to focus on in the community, she said.

The double-sided flier was one of two mailers she said were sent out by the Somerset County GOP to independent voters in Hillsborough to promote Tomson and Erickson for the Hillsborough Township Committee.

When contacted on the matter, Tomson said that he did not have anything to do with sending out the mailer. But he did confirm they came from the county Republican Party.

“A mailer was distributed to our residents supporting my campaign. As a lifelong resident of Hillsborough, I want to make it clear,  the negative fliers do not reflect my values, or the values of our residents,” Tomson said in a statement released to the Hillsborough Beacon.

“As a leader, regardless of who was sending out the flier, I should have ensured it represents my values and that clearly didn’t happen. Anyone who has taken the time to know me understands that I strongly support dialogue, especially when people disagree on issues. Politics can be disgusting as we have seen on the national level, but in Hillsborough they should always be about the issues that are affecting our lives. My goal today and always will be to continue to build a strong and tolerant community.”

In the flier, a picture of a Black woman holding an anti-police sign is used from what is said to be during a Black Lives Matter rally in Hillsborough back in June. The woman’s face is faded out to insinuate that Johnson herself is protesting against the police.

Johnson said the picture was taken from a different rally that she did not attend. The Democratic candidate did attend a Our Revolution Hillsborough chapter rally this past summer, but in no way attended the event to protest against anti-policing and said she has “strong respect” for the police.

“To produce an insidious picture and associate it with my campaign with this false rhetoric is hurtful and false,” Johnson said.

She went on to add that she wants to work with the police department to build bridges of communication with all groups of Hillsborough to make sure everyone in the community feels safe.

Somerset County Sheriff Darrin Russo endorsed both Johnson and Brook for the Hillsborough Township Committee on Oct. 21, stating, “As a 30-year police officer and as sheriff, I know their commitment to mental health and environmental issues will make a difference in ensuring a safe and healthy Hillsborough for the future.”

The owner of a local business was reportedly  appalled by an unflattering photo used of her in the other mailer that was taken from Johnson attending a memorial service in town on Memorial Day to honor the community’s fallen heroes.

The second mailer states both Johnson and Brook have “Plans for more Development” and want to “Mandate Affordable Housing”.

Johnson said that she and Brook’s #BoroForward campaign speaks out against overdevelopment.

As for affordable housing, Johnson believes that it has become very hard for residents, especially those in one income households at this time to raise a family in Hillsborough.

She said that there needs to be more affordable housing for those families and the Hillsborough Township Committee has not been fulfilling its state ordered obligation on the matter.

Johnson encourages people to visit her campaign website www.johnsonbrook2020.com to learn more about her and Brook’s views on all issues for the upcoming election.

After the mailers went out, Tomson said he contacted Johnson to apologize on the matter. Johnson said she appreciates Tomson calling, but said the damage has already been done.

As for the Hillsborough community, Johnson said she has gotten an overwhelming amount of support from residents after the flier came out and that people have checked in on her to make sure she is OK.

“It feels good that people do not want this segmentation in our community,” Johnson said. “I’m confident in the community to stand up against it.”

The Somerset GOP could not be reached on the matter by press time.