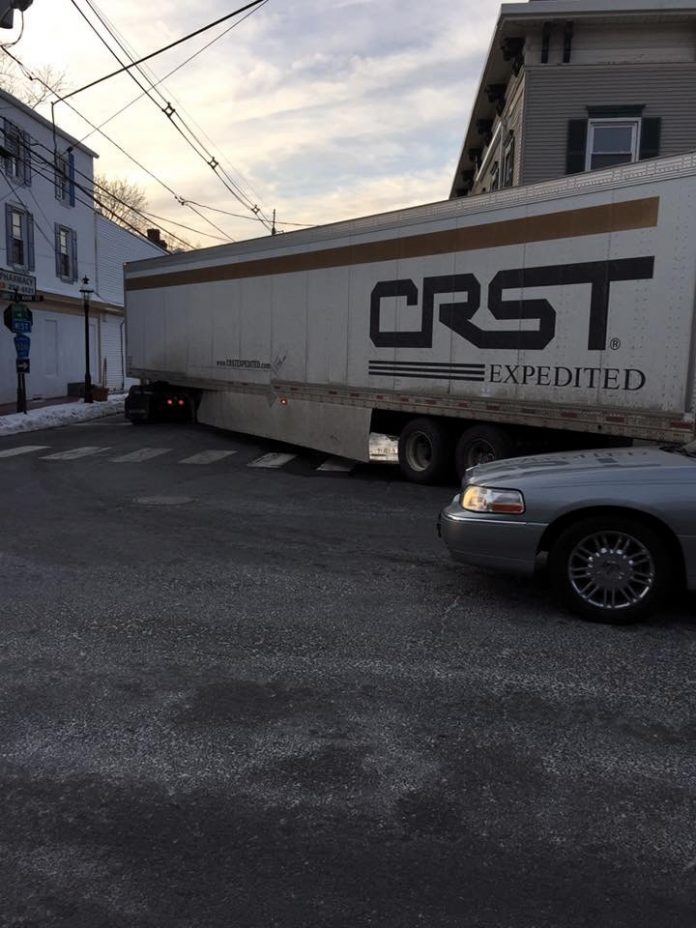 ALLENTOWN – Monmouth County’s top elected official said this week that the Department of Public Works and Engineering “would like to help resolve” Allentown’s issues with trucks passing through the borough “and is open to discussing this matter with all parties involved to develop improvement alternatives.”

Monmouth County Freeholder Director Tom Arnone made the comment in response to an inquiry from the Examiner about the situation residents are facing on a daily basis.

Residents have expressed frustration and concern about large trucks getting stuck on the borough’s small streets, in some instances causing damage to properties.

Patricia Brown of Church Street discussed the residents’ concerns in a Nov. 1 letter she sent to Arnone and other county officials. Brown’s letter was made part of the public record during a recent meeting of the mayor and Borough Council.

Brown wrote, in part, that “I decided to write to you to share my concerns and those of residents who have contacted me regarding recent traffic issues, which people have considered reaching a crisis state.

“… The detour for the construction along Davis Station, Burlington Path and Sharon Station roads (in Upper Freehold Township) has brought these conversations forward. Any time there is new construction in the areas around Allentown, we pay the price, especially with more truck traffic.

“Even with business shutdowns and people working from home due to COVID-19, the constant traffic corridor continues through Allentown with the heavy construction trucks and tractor-trailers. Amazon tractor-trailers (heading to and from an Amazon facility in Robbinsville) are still a daily issue,” Brown wrote.

“Our Borough Council has approved truck ban ordinances for the (county) 500 series roads and even local streets, to no avail. … (A letter from the Borough Engineer states that), ‘The county has agreed that limiting truck traffic within the borough is justified and is agreeable to making an application to the New Jersey Department of Transportation to alter truck routes.’

“Recent events remind me of my appreciation that Monmouth County acquired a grant to study traffic problems in and around Allentown, completed in 2019. But a year later, we have not seen any benefits from the recommendations from the data. We hear nothing of the status of these recommendations.

“We need your help to reduce these hazardous traffic conditions and ask for your continued care and attention on issues causing anxiety and concern related to regional traffic,” Brown wrote.

The Examiner forwarded a copy of Brown’s letter to Arnone and he responded, saying, “Currently, there are two major construction projects in Upper Freehold that directly affect traffic conditions in Allentown, specifically on Route 526, Church Street, and Waker Avenue, and Route 524, Main Street;

“The active construction on Sharon Station Road poses a unique challenge as trucks and tractor-trailers rely on their GPS, which offer suggested detours through Route 524, Main Street, and Route 539, High Street, in Allentown. The expected date of completion is the end of 2021.

“The reconstruction of a fourth bridge on Holmes Mill Road over Miry Run, which required a detour through Route 539, Davis Station Road, and Route 27, Burlington Path.

“The bridge is being replaced due to deterioration and was deemed structurally deficient after a thorough investigation. The anticipated date of completion is early spring 2021 when Holmes Mill Road will open to traffic,” Arnone said.

“Allentown is directly impacted by the road and bridge improvement projects as well as the Interstate 195 corridor, which is highly traveled by Commercial Motor Vehicles (CMVs).

“However, Monmouth County, Mercer County, Robbinsville, Upper Freehold and Allentown are able to work together to create a supporting resolution to move forward with a state application procedure for truck prohibition in accordance with New Jersey Administrative Code.

“It must be noted that back in 2018 prior to the Moving Mindfully Study, Monmouth County needed consensus from all parties involved to exercise (state law), but unfortunately not all parties could endorse the proposed prohibition of CMVs at that time.

“As outlined in (state law), the consent from all parties is required for the proposed regulation because Route 526 is not a self-contained road in Allentown, which was communicated to Allentown prior to the study.

“The Monmouth County Department of Public Works and Engineering would like to help resolve this situation for Allentown and is open to discussing this matter with all parties involved to develop improvement alternatives,” Arnone said.