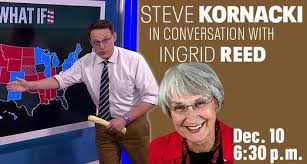 In New Jersey, Steve Kornacki has achieved Bruce Springsteen rock-star status among the politically passionate and electoral nerdy set. His chinos are now as iconic as Springsteen’s denims. And Ingrid Reed, the producer of Steve’s Princeton speaking events, has the appeal among New Jersey political aficionados of a Dolly Parton at a Country Music Awards ceremony.

“Election 2020: What’s Next,” the concluding program in Ingrid Reed’s series of educational Election 2020 seminars, attracted an astounding 646 people, many of whom live in the Princeton area, but some Zooming in from places all over North America. Furthermore, most attendees stayed till the end of the program, a few dozen submitted thoughtful questions, and everyone patiently endured delays that were due to some technical difficulties.

With clarity, intelligence, and enthusiasm, Steve simply and succinctly shed light on the extraordinary complexities of the election 2020, and why at 3 a.m. on Wednesday, Nov. 4, the morning after Election Day, it really did appear that Donald Trump could have been reelected.

Ingrid’s legacy involves neither her singing nor her wardrobe. A founder and board chair of NJ Spotlight and formerly the director of the NJ Project at Rutgers University’s Eagleton Institute of Politics, Reed is known for her passionate, insistent, perseverant, strategic pursuit of civics education for New Jerseyans, and is driven by her belief that education is the key to a thriving democracy. She is best known in Princeton for producing and moderating her Princeton Public Library/Princeton Adult School programs and writing columns in various New Jersey media about state politics. I have joined the ranks of hundreds of area residents who are dedicated students at what amounts to the Ingrid Reed School of NJ Politics.

Even though she has held many jobs in her life, including mother, grandmother, and wife for more than 60 years to the recently deceased former Princeton Borough Mayor Marvin Reed, educating New Jerseyans about New Jersey’s political system has remained her number one avocation. Her goal of promoting a fact-based understanding of how our democracy works also has been very important to several of her professional roles at not only Rutgers Eagleton Institute, but also Princeton University (assistant dean of Public Affairs) and Rockefeller University (vice president for Public Affairs).

Kornacki recognized Ingrid’s intense commitment to the integrity and strengthening of our political system, when he first met her in 2002. The friendship between Ingrid and Steve began when Ingrid met Steve at the News 12 New Jersey studios in Edison. Frustrated by the fact News 12 was not available to Princeton residents, Ingrid decided to watch the returns and analysis of the New Jersey election by showing up at News 12 studios and watching it on the monitors. Steve at the time was co-host of a political news series for News 12 New Jersey – right before he left to work for PoliticsNJ.com.

“Ingrid became one of my very favorite people,” said Steve, who acknowledged that he would do anything for Ingrid – very good news for the Princeton Public Library which now has hosted him twice in the past 11 months.

Not one to rest on her laurels or to rest at all, Ingrid’s next project is what might be called an online primer on New Jersey redistricting since 2021 is the year to redraw legislative and congressional districts based on the census results. It starts with a brief reference to New Jersey’s role in shaping what the U.S. constitution says about redistricting and concludes with a description of New Jersey’s current reform version of redistricting.

I do not know when or where Ingrid will be speaking on this topic, but one thing is certain – I will be there. I would like to cast my vote in favor of these virtual presentations. As much as I adored seeing Steve in person on Jan. 8 in the library’s community room, the discussion on Dec. 10 was in fact far more democratic. The virtual event allowed for nearly 10 times the number of people to participate. And thanks to the chat function, I was even able to connect with some friends to whom I had not spoken in months. The downside to a virtual event is the lack of a post-discussion, face-to-face book signing, but Princeton’s Labyrinth Books did offer a discount to those participants who purchased the Steve Kornacki Book The Red and the Blue. And furthermore, an in-person event might have thwarted a discussion of Steve’s chinos, because of his self-effacing and seemingly easily embarrassed demeanor. Ingrid announced that Steve had donated $30,000 worth of chinos pants – that the Gap sent him as a promotion – to a Boys and Girls Club of America.

“There is no silver bullet to success,” said the Boys and Girls Club of America website. It takes an army of people, a safe environment, high-quality programs and unique experiences to level the playing field for all kids. Boys & Girls Clubs don’t just do one thing, we do whatever it takes to build great futures for America’s young people.” And that includes providing professional clothing items – like Steve Kornacki chinos – to any young person striving to enter the business world.

All I can say is that the Kornacki/Reed words of wisdom are a perfect fit for me.