SAYREVILLE – After his appeal contesting the results of his 2019 mayoral bid was dismissed in New Jersey Superior Court, a Sayreville resident is looking to bring reform to the election process.

Arthur Rittenhouse, the Republican candidate for Sayreville’s mayor in 2019, announced in a Jan. 11 statement that he would not appeal a Superior Court decision dismissing his verified petition against the election.

When the results were first tallied after Election Day 2019, Democrat Victoria Kilpatrick was declared the winner over Rittenhouse by a margin of three votes. A recount increased Kilpatrick’s lead to six votes and an additional count of provisional ballots increased her lead to 18 votes.

Rittenhouse’s legal team argued in the petition that there were numerous errors and irregularities during the election process capable of changing the outcome of the election, seeking to have the court must declare the results of the mayoral election null and void and order a special election to be held.

According to the statement, Rittenhouse is not appealing the court decision because cost at this point is prohibitive.

“I would like to thank the support I received from the residents of Sayreville, the individuals and groups from Middlesex County and the state,” he said.

Instead, Rittenhouse said he plans to work toward reforming the election process so voters get back to voting in person, as well as better regulation of mail-in and provisional ballots.

As a result of the ongoing coronavirus pandemic, Gov. Phil Murphy ordered that the 2020 election be primarily conducted through mail-in ballots. Excluding individuals with disabilities, voting machines were prohibited and New Jersey residents who voted in person could only cast provisional ballots.

According to the press release, more than 500 ballots were rejected in Sayreville during the 2020 election.

“The legislature must go back to in-person voting immediately,” Rittenhouse said in thes statement. “Safety precautions can be taken to keep everyone safe. Absentee ballots have worked for years; there is no reason they cannot work today.” 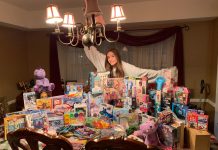