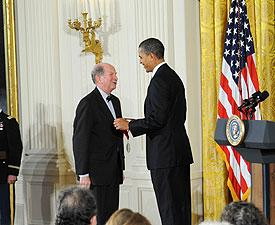 Picture of Stan Katz receiving the National Humanities Medal from then President Barack Obama in 2011.
×

Picture of Stan Katz receiving the National Humanities Medal from then President Barack Obama in 2011.

In these recent times of unbearable political anxiety, I have relied on three things for comfort and sustenance:
1. Cheetos; 2. Music; 3. Bartender – with coffee as the drink being served.
I have written a lot about the curative qualities of Cheetos, comprising chemicals and dust with a smattering of real cheese – I think. I am hoping that my orange-stained fingers and mouth scare away COVID as effectively as it has scared away people.

My music selection was enormously satisfying – and something I recommend to everyone. Jazz musician, composer and jazz education entrepreneur Wynton Marsalis, a Princeton favorite (he has performed numerous times at McCarter Theatre, lectured to Princeton University students and received a Princeton University honorary degree), released an extraordinary new album titled “The Democracy! Suite” – a masterful musical metaphor for democracy. It is a bit atonal and unsettling at times, but with unforgettable beats and melodies that prevail – like democracy – over dissonance. Mr. Marsalis was supposed to be in Princeton at McCarter Theatre in April, but alas that is not happening. I hope he returns soon to the McCarter stage and performs each of the songs/messages of democracy.

And finally, I have been blessed with an invaluable friend – the nearly 87-year-old Princeton resident Stanley Katz, former professor of the History of American Law and Liberty at Princeton University and a specialist on American legal and constitutional history, as well as on philanthropy and non-profit institutions. He serves as my coffee-break bartender – not the barista who serves me, but rather someone who for decades has listened to me and provided insight and intellectual reassurance as I have angsted pitifully in his presence while slurping a cup of coffee.

Although I seem to remember going to a party at which Stan allegedly retired from his day-to-day responsibilities at Princeton University, he is consulted regularly as a world-renowned expert on American legal and constitutional history and on philanthropy and non-profit institutions. He still is writing, researching, publishing, serving as PU student thesis advisor, teaching students within the PU Civic Engagement program and teaching adult education courses at the Princeton Senior Resource Center’s Evergreen Forum. His most recent research topic is the impact of the pandemic on cultural organizations in America.

But as I was melting down over the state of our democracy, I was less interested in hearing about Stan’s research on philanthropy and more interested in his opinion about whether our country’s democratic principles were going to survive. My faith and awe in him stems from his guiding principle and probably his legacy:

“I only have one aim in life, to do what I can to improve the quality of democracy in the United States,” Professor Stanley Katz said at the time he was awarded the National Humanities Medal by President Barack Obama in 2011. He has worked toward this lofty goal through decades of teaching, writing, reassuring Pam, and speaking on ways to make our academic institutions better.

“So Stan,” I said, holding my cup of coffee and communicating with him in typical COVID fashion, over the phone. “Are we going to survive – we meaning our democracy – or is the great American experiment over, doomed?” My friends told me I should be more “chill,” less hyperbolic, because the country and Pam made it through 1968. But in my gut, I know there was something vastly different between 2020 and 1968. 1968 featured the assassination of Martin Luther King, the assassination of Bobby Kennedy, the Vietnam War, urban-based violent and destructive riots in cities all over the country. The unrest was so unnerving in big cities that friends and I – all of whom were working in Washington, DC – had to give up living dormitory style in an old townhouse in Georgetown and move out of the city to a massive apartment complex, equally depressing, but at least not life-threatening.

“What’s different – say something that gives me hope?” I asked Stan.

“You are right to see the difference,” said Stan. “1968, in spite of all the turbulence, was a culmination of a lot very positive social movement activity – high point of civil rights movement, high point of progressive social justice activity, culmination of progressive forces in American society. It was an enormously exciting, hopeful time that mobilized millions of Americans with a promise of a new social landscape.” So in spite of the violent and traumatic state of affairs – some of the classes Stan taught on college campuses often were interrupted by demonstrators and tear gas, it was actually a very positive time, in his opinion.

“On the contrary, 2020 was not a very positive time,” Stan said. Americans are experiencing a crisis of trust (a combination of mistrust and blind trust) – people having no or little trust in our democratic institutions and processes and filling that void with a trust in people and actions that seek to undermine our democratic institutions. “But this just didn’t happen in the past four years. It has been building up to this for decades,” he said.

So now that I understand the difference, now what? Do I just wait and see, be depressed, be outraged and throw eggs at people who disagree with me? As a young man from Chicago, Stan wanted no part in running his father’s egg-breaking business, supplying thousands of freshly cracked eggs for bakeries such as Sara Lee. Instead, Stan chose academia, with a real focus on teaching. So his advice to me was to keep on learning – the only tool that can effectively thwart the forces trying to destroy democracy. Instead of burying my head in the sand or exhibiting exhausting rage when confronted with a stressful and negative situation, I should try learning and achieve a better understanding of how we ended up with the heartbreaking, gut-wrenching, violent attack on this nation’s Capitol.

I missed the class that Stan taught last semester at the Evergreen Forum on the Reagan Revolution – “Ronald Reagan’s America: The Conservative Revolution and the Welfare State.” But no violent demonstration will keep me from the class he is teaching this spring – “The Administration of Donald J. Trump – What Happened to the Republican Party.” The class description is a series of questions: “How are we to understand the historical significance of the Trump presidency? To what extent should the Trump administration be understood as an evolution of the traditional Republican Party? Or was Trump simply a disrupter of tradition, soon to be ignored by the Party? To what extent did Trump change the international role of the United States from that of international hegemon to that of an island fortress? Can we yet tell what Trump’s political legacy will be?”

Even though I have lived through the Trump era, my true understanding is as superficial as a Tweet.
https://www.princetonsenior.org/evergreen-forum/
Classes begin on Feb. 22. Register now.