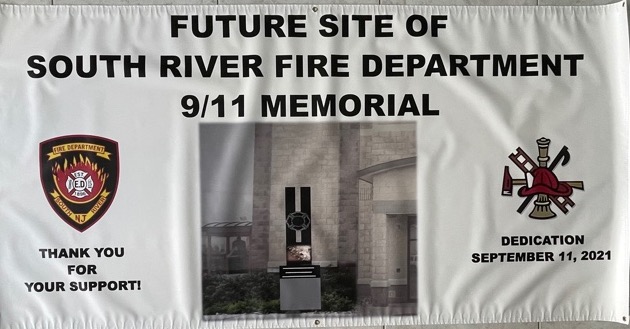 To honor 343 New York City firefighters who died during the Sept. 11, 2001, terrorist attacks, the South River Exempt Firemen's Association will build a 9/11 memorial.
×

To honor 343 New York City firefighters who died during the Sept. 11, 2001, terrorist attacks, the South River Exempt Firemen's Association will build a 9/11 memorial.

On Sept. 11, 2020, the South River Fire Department’s (SRFD) South River Exempt Firemen’s Association announced that it obtained one of the few remaining pieces of steel from the World Trade Center, according to a prepared statement.

“At a South River Historical and Preservation Society meeting, a discussion on what to do with a section of New York City World Trade Center steel artifact took place. The borough already has a 9/11 Memorial in place at Daileys Pond. … I was asked if the fire department would be interested. I accepted the task on behalf of the SRFD exempt association, thus the artifact was entrusted to me,” said Paul Migut, the association’s 9/11 memorial committee chairman.
In addition to being an active firefighter, Migut is also a South River Historical Society Executive Board member.
“It was decided this sacred remnant of the World Trade Center be utilized as a monument to the 343 New York City Fire Department’s firefighters that perished, in addition to other first responders and citizens that perished in the attacks on 9/11,” Migut said.
Migut said the 9/11 memorial will be built at the new Jackson Street Fire Headquarters, located on Jackson Street and Raritan Avenue.
Committee members include Migut, Robert Bodak, Eric Gartner, Steve Kuzmack, Charles Matts III, Thomas Swenticky, Wayne Wagner, Exempt Association President Charles Willever and Department Chief Gerry Murphy.
“The association currently has a granite wall with members names who have served the department [more than] 100 years, in addition to the bronze bell … that initially was used to alert firefighters of an alarm, later used as a monument in front of police headquarters, [which was] moved to George St firehouse, and finally placed at the new Jackson Street headquarters,” Migut said.
In order to showcase the building of this upcoming memorial, Migut said a banner was placed at the site at the Jackson Street Fire Headquarters.
Migut said construction of the base will commence accordingly and the memorial is expected to be completed before or during the summer.
On Sept. 11 this year, Migut said the association and fire department will hold a formal dedication, which is the 20th anniversary of the horrific attacks.
“We are still accepting donations from citizens and businesses. This project is based solely on donations, no public funds will be utilized. We have commissioned local sculptor Blaise Batko as our designer,” Migut said.
Migut said all donations will be recognized during the association’s dedication ceremony. Copies of donation pages were sent to residents with their utility bills and the response has been most encouraging.
For more information and to donate toward the memorial project, email Paul Migut at migchief94@msn.com.
Contact Vashti Harris at vharris@newspapermediagroup.com.