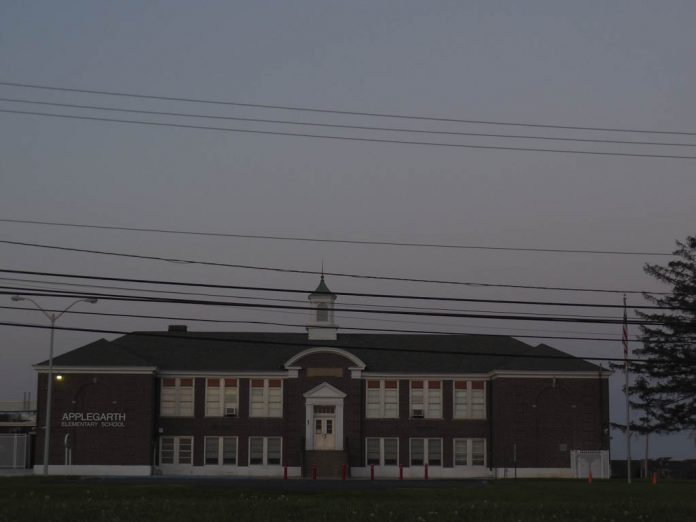 MONROE – The construction of a much-needed Applegarth Elementary School may be on the horizon.

In February, the Monroe Board of Education (BOE) approved a resolution to authorize and direct the administration to engage a limited design study to explore design costs for the construction of a new school facility at the site of Applegarth Elementary School, 277 Applegarth Road, similar to the Claremont Elementary School in Franklin Township, Somerset County; and to authorize and direct the district administration to solicit proposals for professional services including, but not limited to, the architect and cost engineers previously contracted by Franklin Township to design Claremont Elementary for reasons of cost, efficiency and consistency.

The resolution also authorized and directed the administration to engage the district, architect and engineer of record to update the project costs estimated for additions to Barclay Brook and Brookside elementary schools and Monroe Township High School.

Peter Tufano, BOE chair of the of the Buildings, Grounds and Transportation Committee, said the committee had discussed student growth. He said committee members visited Claremont Elementary School along with members of the administration including Schools Superintendent Dori Alvich.

He said the committee found the school to be “a beautiful well laid out school,” however the school had some short comings in the area of the HVAC (heating, ventilation and air conditioning) system and some floor finishes.

“Overall [it was] a construction type that the board would like to see further research considered for future construction,” he said.

Alvich said the classrooms at Claremont School are similar to the elementary schools in Monroe with cubicles.

“Some of the things that this school has done that our district hasn’t done in the past is it was built to LEED (Leadership in Energy and Environmental design) standards,” she said, explaining it was designed for the environment. “For example, the windows on the north side of the building are smaller than the windows on the south side of the building to let in more light. The classroom ceilings were built on a slant for better lighting for temperature regulation and canopies over windows monitors light coming into the classrooms.”

Alvich said the HVAC system at Claremont was highly efficient, however, the Franklin district was not happy with it. The building was designed for some of the special education population with a sensory room as well as designed to the curriculum with a dance room. They built a cafeteria, gym and stage area, which Alvich said is similar to what Monroe sees at Oak Tree Elementary School. Also, the school has a playground in the back.

“The school was kind of built farm like with metal [façade], not brick,” she said. “It is a cheaper fit into the landscape of Franklin Township, which is a very rural area.”

“The motive of the committee was to create efficiency and consistency by using the same people who just completed [Claremont Elementary],” he said.

In 2018 and 2019, the Monroe district attempted to address the dire needs of student enrollment growth through referendums; however, voters defeated both referendums.

In 2018, a $68.8 million referendum that proposed the construction of a new middle school was defeated by 143 votes. A third proposed referendum was deferred due to the novel coronavirus pandemic.