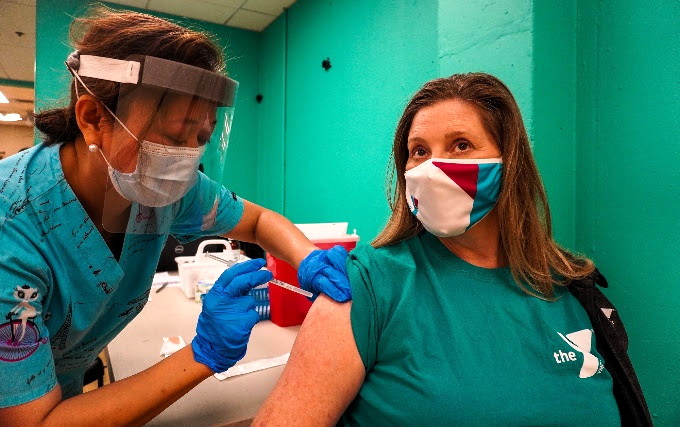 Dhillon and Shaan Choudhri had not seen their grandparents in about a year.

With their parents being healthcare workers, the risk was too great to leave their home in Lawrence Township to visit their elders in Edison.

So, instead, the junior and freshman at the Lawrenceville School, respectively, would say hello on the phone or join in on Zoom calls with their extended family.

“We hadn’t seen my grandparents at all pretty much since quarantine started,” Dhillon said.

That all changed during the second week of March after their grandparents received their second doses of the COVID-19 vaccine.

However, that was not without a struggle. The boys said their grandparents had a very difficult time scheduling their appointments, even though they met eligibility requirements.

“It was really hard for them to figure out where to go on a website and how to make an appointment,” Dhillon said.

“It’s a lot of information to take in,” Shaan said. “I remember, I would hear on the phone every day that [my grandmother] would ask where she could get an appointment.”

Dhillon said now that the eligibility requirements are opening up, many more people are seeking the vaccine. The brothers felt if their grandparents had difficulty, they assumed others do, too.

They decided to “make information available in a simple way,” Dhillon said.

Dhillon has been coding since age 12, and he and Shaan basically learned by watching YouTube videos and reading books.

The used their spring break, which was the last week of February into the beginning of March, to develop their website. They finished after three weeks of work.

Shaan said they focused on making the website simple to navigate. He said there were a lot of stages to find the best layout.

On March 10, the website www.njvaxfinder.com went live and more than 140 people had unique log-ins as of press time, Dhillon said.

The brothers have to input information such as a vaccine center’s name and location, but then the website filters and uploads the information to the database. The information is updated every four hours.

“It’s a tool to have centralized information on where you can get a vaccine. It’s organized for you so you don’t have to browse yourself,” Shaan said.

Currently, the website links to the New Jersey registration site and vaccination centers, but Dhillon said he would like people to be able to register on their site, eventually.

The website upgrades have already included adding a feature on the map that shows vaccine sites by ZIP codes and mileage. Dhillon hopes to create a mobile app with an SMS application so users receive a text message when an appointment becomes available.

Dhillon said some relatives have used the site already and “it’s been helpful to them.”

Although their grandparents were vaccinated prior to the website going live, when the group of six reunited finally, Shaan said, “It was great seeing them because our parents are vaccinated so there was [little] risk.”

Dhillon added that they had not been out much recently, and school was remote, so they felt safe.

“We really want to make sure we give out accurate information,” Dhillon said.

Black innovators reflect on time at Bell Labs: ‘I was born to be a scientist’