HOWELL – Municipal officials have adopted an ordinance aimed at curbing a practice they call the “excessive consumption of municipal services.”

Simply put, Howell Township Council members want people who cause problems to pay for the responses that are required to address those issues.

Officials said the ordinance does not target a specific location, however, they said there have been issues such as a group home where residents leave without authorization, necessitating a significant police response and a search that may involve multiple agencies.

In other cases, they said, business owners host events without hiring adequate security personnel and Howell police have to be called to deal with problems.

Municipal officials said the ordinance will target repeat offenders and not a single instance of a problem at a location. They said the cost of dealing with these problems should be paid by the property owner and not through general tax revenues.

During any 60-day period, properties that exceed a specified number of qualifying calls will be designated as nuisance properties and will be subject to penalties, according to the ordinance.

Hanlon said his clients were objecting to certain provisions in the ordinance and seeking clarification on other points.

“By statute that should be called a municipal service fee, but it is my understanding that by statute those fees are supposed to be calculated to cover the cost of services being supplies by the municipality, including such things as police calls.

“As it relates to the mobile home parks, it is our understanding we are already paying for this service. On that basis, we ask that mobile home parks be removed from the scope of this ordinance,” Hanlon said.

“It is my understanding that the goal here is to not impose penalties on any property owner. The goal is to motivate the property owner to do the right thing and abate nuisance calls before (those calls) put an unnecessary drain on your first responder resources,” Hanlon said.

The attorney asked the council members to postpone a vote on the ordinance.

“For all of my properties, if we are going to address tenants who are causing these types of problems, we need the leverage of enforcement.

Township Attorney Joseph Clark said no one would be assessed a penalty without a hearing. He said he understood the issues Hanlon raised about due process, but said, “I think there is enough in the hearing section (of the ordinance) to provide adequate protection.”

Berger thanked Hanlon for his comments on behalf of his clients and asked him to contact Clark directly if he has any issues with the legislation. 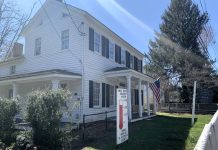