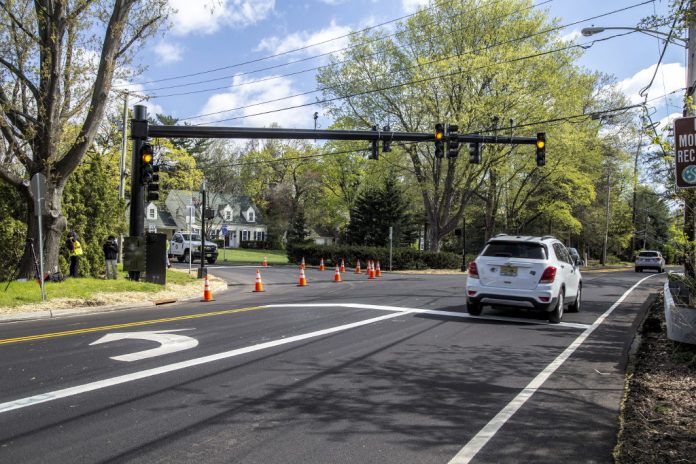 TINTON FALLS – After nearly four years of planning, design and construction, a new traffic signal that has been installed at a busy intersection in Tinton Falls has been activated.

Members of the Monmouth County Board of County Commissioners held a ceremony at the site on April 22 to mark the signal’s activation.

In addition to constructing the traffic signal, construction crews installed a “Red Signal Ahead” sign, widened Sycamore Avenue to accommodate a dedicated left turn lane for vehicles heading east, completed curb work, milling and pavement resurfacing, upgraded signs and revised street striping along all approaches to the intersection, according to a press release from the county.

The development of the traffic signal at the intersection of Hance and Sycamore avenues dates back to 2017. Because both streets are under the jurisdiction of the county, the project was handled by the county’s governing body.

According to the county, the injury rate that occurs from motor vehicle accidents at the intersection of Hance and Sycamore avenues is more than three times the state average, and has totaled $12 million in damages and personal injuries during the past 20 years.

After discussions with Tinton Falls officials and residents during the following years, the commissioners (formerly the Monmouth County Board of Chosen Freeholders) expected the traffic light to become operational in 2020.

However, the project was delayed by the coronavirus pandemic that overtook New Jersey in March 2020. County officials said the pandemic created shortages in certain materials and prevented them from obtaining the traffic signal equipment in a timely manner.

Commissioner Director Thomas A. Arnone, who is the liaison to the Monmouth County Department of Public Works and Engineering, spoke at the ceremony before activating the traffic light.

“I am happy to see the long-awaited improvements to this intersection come to completion. These enhancements were made in an effort to maintain the high quality of life of the area’s residents (and) to improve the safety of the intersection.

“The county worked closely with Tinton Falls to minimize the impacts to the surrounding community and these improvements were designed within the existing right-of-way and without any impacts to the adjacent residential properties.

“These improvements were constructed by on-call and in-house forces. The end game is we have a safer road. I think the people of Tinton Falls will be pleased with this,” Arnone said.