HOWELL – On June 15, members of the public are expected to have a chance to voice their opinions on an ordinance that would, if adopted by the Howell Township Council, prohibit cannabis businesses from operating in the township.

During a meeting on May 25, Deputy Mayor Thomas Russo, Councilman John Bonevich, Councilwoman Pamela Richmond and Councilwoman Evelyn O’Donnell voted “yes” on a motion to introduce the ordinance.

Mayor Theresa Berger was absent from the meeting.

The public hearing on the ordinance was scheduled for June 15.

In the wake of the referendum, state officials have taken steps to enact the cannabis legalization process.

The ordinance does not prohibit the delivery of cannabis items and related supplies into Howell by a delivery service that is located outside the township.

During public comment, resident Marc Parisi suggested that council members leave the decision to residents, like state officials did with the public referendum that was placed on the ballot during the November 2020 general election.

“I have a feeling this is going to become politicized and could possibly be used in the (Howell) election next year and I really don’t want to see that happen. … My suggestion would be that the council … put a question on the November ballot and allow residents to vote on whether they want marijuana-related businesses,” Parisi said.

He said going that route could be a way of de-politicizing the issue.

Bonevich said he knows that on the November 2020 public question, Howell residents voted 70% to 30% “for marijuana, for dispensaries, for retail; the township voted for it. But this ordinance is not for that, this is about home rule.

“We always complain that Trenton says this, the state says that. The state law (dealing with legalizing cannabis) says we have 180 days to control (cannabis).

“If we only want retail or distribution on Route 9, this is our chance to do it. If we don’t do it within 180 days, we could have dispensaries all over the place, next to residential places where we don’t want it,” Bonevich said.

The councilman said if retail, consumption and/or cultivation activities related to cannabis are permitted to begin in Howell at locations which are not approved, then without taking action on the proposed ordinance, “we are stuck with it, it gets grandfathered in.”

Township Attorney Joe Clark said if municipal officials “do not move to ban it and we allow all six classes of cannabis establishments to be legal in Howell, we don’t have another opportunity to opt out of that law for five years.

“And after that five-year period, even if we do opt out, everything (that exists at that time) will be grandfathered in. So whether we like it or not at that point, we have it.

“This way we get to ban it for now and we can revisit it when there are more rules and regulations in place, when we see how other towns are faring with their tax revenue” from cannabis businesses, Clark said.

The state statute relating to the legalization of cannabis businesses requires action to be taken by municipalities within 180 days of Feb. 22, 2021, which would be Aug. 21, 2021. 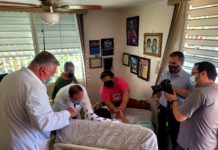 Physicians, clinicians travel to Puerto Rico to assist with vaccinations, other health measures