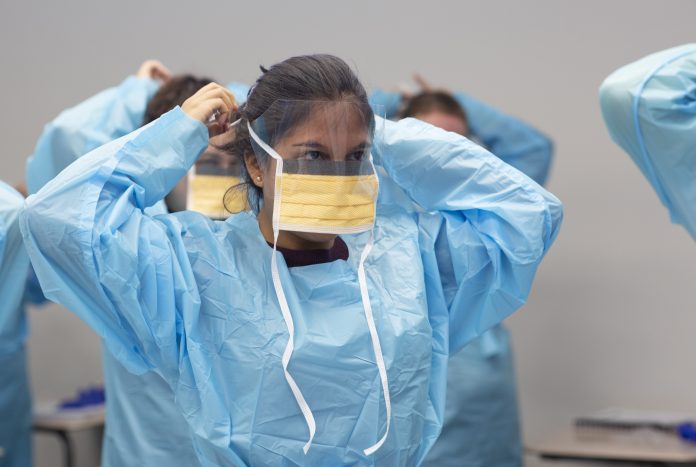 Aiming to prevent re-imposing mandatory mask-wearing when students head back to school in September, a group of parents and students is suing Gov. Phil Murphy and the state commissioners of education and health in U.S. District Court in Newark.

The lawsuit, which was filed by Princeton attorney Bruce Afran on July 9, names Murphy, Commissioner of Education Angelica Allen-McMillan and Commissioner of Health Judith Persichilli.

The lawsuit alleges that imposing mask mandates and other restrictive measures on school children is burdensome, and restricts and limits the rights of speech communication, association and privacy protected by the First, Fifth and 14th amendments to the U.S. Constitution.

Murphy lifted the face mask, barrier and social distancing requirements for children and adults at theaters, malls, stores, restaurants, houses of worship, weddings and similar community settings earlier this year – but not in schools.

The mask mandate and other COVID-19 measures that apply only to school children – and not to others who gather in public – violates their First Amendment rights, the lawsuit said. This includes wearing a mask throughout the school day, which inhibits their ability to clearly communicate – verbally and non-verbally through facial expressions.

Requiring children to stay at least six feet apart at all times – including lunch – and to stay inside the Plexiglass barrier surrounding their desks also violates the First Amendment right to free association, the lawsuit said.

The requirement to sit behind a Plexiglass barrier, enforcing a separation between students, “is an alienating experience and a type of imprisonment within the classroom,” Afran said.

Applying the mask mandate and other measures that target school children – but not others who gather in public – violates the equal protection clause of the 14th Amendment, the lawsuit said.

Those mandates also violate the equal protection clause of the New Jersey Constitution, “thereby depriving plaintiffs of their right to due process under the Fifth Amendment to the U.S. Constitution,” the lawsuit said.

Murphy and Allen-McMillan specifically stated that school districts are empowered and authorized to continue social distancing and physical separation between students, the lawsuit said.

Murphy also expressly reserved for himself the power to reimpose mask mandates and other restrictions in the schools via executive order, the lawsuit said. The complaint challenges state officials’ power and authority to do so.

“There is a very realistic chance” that the mask mandate will be reinstated, Afran said.

“Children are being used, in a sense, as tools in a great experiment. The governor does not have the statutory power to do this,” Afran said.

Murphy would have to abide by administrative procedures that require public hearings before rules that limit children’s rights could be carried out, Afran said. There have been no public hearings and the State Legislature has not taken action, he said.

Mandatory mask wearing and other measures “are not only a violation of basic fundamental liberty rights of children, but there is no rational basis for them,” Afran said.

“Children are not known to be truly susceptible in any real way to COVID. There has been virtually no child mortality in any significance from this disease,” he said.

The Princeton, Lawrence and East Windsor Regional school districts brought some students back into the classroom using hybrid learning, in which they divided their time between in-person and remote learning, during the 2020-21 school year. Other students chose to stay home and learned remotely.

“Clearly, there is overlap with family and sibling exposures, so those six cases are confirmed exposures within the school and no other known COVID-19 exposures,” Grosser said.

In the Lawrence Township Public Schools, 96 students tested positive for COVID-19 between January and April, said Ross Kasun, the superintendent of schools. The district only knows of the cases that were reported to it, he said.

Students who were only on remote learning did not have to share information with the school district, so those numbers may be low, Kasun said. There were many cases of students who were learning remotely and who did not report test results to the district, he said.

In the East Windsor Regional School District, which includes East Windsor Township and Hightstown Borough, there have been 202 students who tested positive for COVID-19 since September 2020.

None of the cases listed on the East Windsor Regional School District’s COVID-19 dashboard are directly related to an exposure while in school, said Mark Daniels, the superintendent of schools.

“Through the contact tracing process, it appears the positive cases were associated with activities and interactions that occurred while students were outside of school,” Daniels said.

This would include household or family transmission, community activities and social gatherings, Daniels said.

Afran dismissed the need for “harsh, draconian measures” in the schools. Adults can be vaccinated against COVID-19, he said.