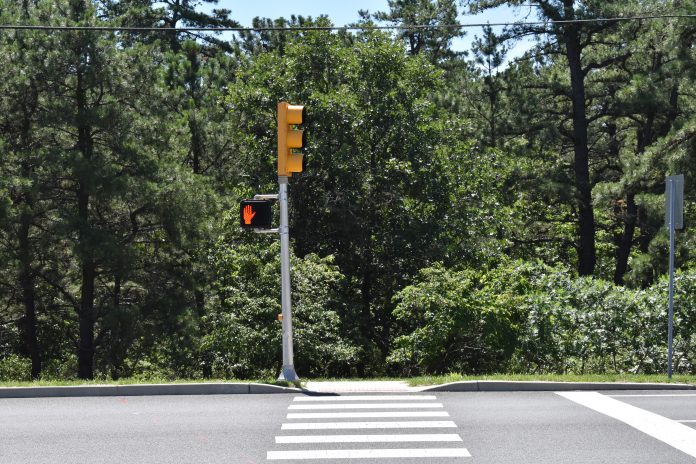 Following the death of a pedestrian on Rosedale Road last month, residents are calling on the Princeton Council to improve pedestrian safety at the intersection of Rosedale Road and General Johnson Drive.

The 82-year-old man was killed as he attempted to cross Rosedale Road at General Johnson Drive. He had activated the push-button pedestrian crossing signal was walking across the road when he was struck by a car, according to reports.

Several residents asked the Princeton Council at the Sept. 13 meeting to assign a school crossing guard or a police officer at the intersection when children are on their way to school and at dismissal time, while others suggested installing a traffic light to improve safety.

Lisa Serieyssol, who chairs the town’s Pedestrian and Bicycle Committee, said students cross the intersection to reach the Johnson Trolley Trail to get to Mountain Avenue, Community Park South and Guyot Avenue to reach the Princeton Middle School and Princeton High School.

Students who live in the Edgerstoune neighborhood, near The Hun School, also cross the street on their way to the Johnson Park School. The elementary school is located at the end of General Johnson Drive.

“I can’t stress enough the importance of the safety of that intersection and I am asking you to re-evaluate your commitment to placing a crossing guard at that intersection,” Serieyssol said.

The intersection of Rosedale Road and General Johnson Drive is the subject of a Safe Routes to School grant, but improvements will not be in place until 2023 or 2024, she said. A police officer or crossing guard would provide confidence to students who cross Rosedale Road in the meantime.

Tineke Thio, who sits on the Pedestrian and Bicycle Committee, also asked for the issue of pedestrian safety to be put “on the front burner.”

“Traffic deaths are never an accident. They are the result of decisions made by the people who are in charge. I call on this Princeton Council to be different from the Princeton Councils (that preceded you) and put our lives and our safety first,” Thio said.

Mayor Mark Freda said the safety issues are not being ignored. The town has been in contact with Mercer County, which controls Rosedale Road, about making improvements to it, he said.

“We have to not just look at the intersection, but the whole area. I don’t want people to think we are not doing anything. I am sorry that we are not moving as fast as people would like,” Freda said.

The town has tried unsuccessfully to hire crossing guards, he said. There are times when police officers have been pulled off patrol and out of headquarters to fill in as crossing guards.

“It is not for lack of desire or effort” to hire crossing guards, Freda said.

Princeton Councilman David Cohen said a crossing guard may not be the answer.

A crossing guard would be stationed at the intersection when students are on their way to school  and in the afternoon at dismissal time, but middle school and high school students come home in the afternoon over a longer period of time because of after-school activities, Cohen said.

“We need to find an engineering or enforcement solution,” he said.

Meanwhile, Municipal Engineer Deanna Stockton said the town had applied for a Safe Routes to School grant in 2018. A traffic study has been completed, and it is being reviewed by Mercer County and the New Jersey Department of Transportation, which oversees the grant program.

Safety measures such as a change in the speed limit and the installation of a traffic signal are under consideration, but a warrant is needed for the traffic signal, Stockton said.

Mercer County is going to repair the sidewalk on the bridge over the Stony Brook, as well as the roadway, Stockton said. Both were damaged by flooding from Tropical Storm Ida on Sept. 1.

The county plans to re-stripe Rosedale Road to make the lanes narrower, and also plans to make upgrades to the traffic island at the Greenway Meadows Park, she said.

Princeton Councilwoman Mia Sacks said there is only one solution, which is a traffic light at the intersection.

“We have been trying to get that for a very long time, (but) it is out of our reach because it is a county road,” Sacks said.

“There is some glimmer of hope that we can make that (traffic signal) happen,” Freda said.

Princeton Councilwoman Eve Niedergang said that a fatality “gets people’s attention” and maybe now the town’s requests will be heard.